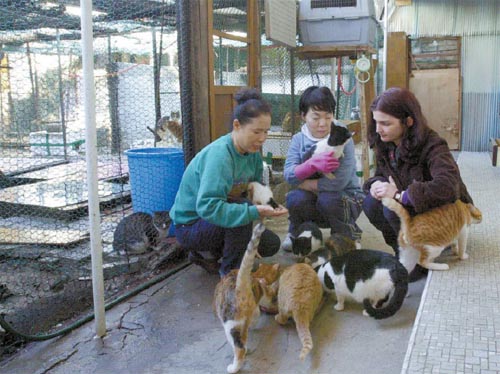 
Rain or shine, Kim Ha-yeon starts his day at 2 a.m. delivering newspapers in southern Seoul. But that’s not his only early-morning task. From the plastic basket dangling on the back end of his motorcycle, he also delivers food for stray cats that wander the area.

As an amateur photographer, Kim uses his lens to capture these grubby, weather-beaten, yet gracefully composed cats under the cold street lights. “They have a reason to exist in our ecological system, but people don’t want them to,” Kim said during a recent exhibition where his photos were displayed.

The concept of animal rights is gaining ground in Korea, particularly toward stray cats - often cats are victims of traffic accidents and animal cruelty.

Unlike dogs, cats have been traditionally associated with negative images in Korea. The term “thief cats,” the phrase for strays in Korean, originated from the way they used to survive by stealing food. Traditional markets still secretly sell “cat juice,” on the folk belief that the creatures’ pliant spines and muscles are good for treating arthritis.

But for young generations, the independent, proud and mysterious nature of felines are an artistic icon and a touchy subject often featured in books, blogs, paintings and stationery.

“For some people, cats are urban outlaws who scavenge rubbish bags and make their neighborhoods dirty,” said Ko Kyoung-won, the author of “I Revel in Street Cats” (2007) and “I’m Leaving to Meet Cats: A Happy Journey in Search of Happy Cats in Japan” (2010), during the exhibition she held jointly with Kim Ha-yeon at Seongbukdong Gallery in northern Seoul.

Titled “Family,” the exhibition captured the fleeting moments the grimy and aloof, yet mysteriously touching feline lives in Seoul’s squalid back alleys. 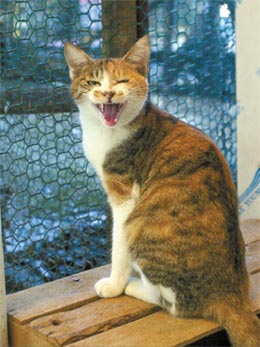 A group of four cats huddle on top of a small ventilator as if drifting on a small boat away from humans; a pair of grubby kittens nuzzle each other on rough pavement, with their expressionless eyes unsure of their fate.

Most of these cats, Ko said, are now dead or, in cat lovers’ language, “have crossed the rainbow bridge.” Their life expectancy averages two to three years due to malnutrition, traffic deaths and other harsh conditions from living outdoors and is considerably shorter than their domesticated peers that live 15 to 20 years.

“I started taking pictures of them with a question: Is there no way humans can peacefully coexist with street cats?” Ko said. “I’m hoping that this kind of event may give people some room to think about it.”

Controversy over the treatment of cats often makes headlines. In 2006, residents of a Seoul apartment culled scores of stray cats by driving them into the basement of their building and cementing shut all the exit holes.

Last year, the local government of Geomun Island moved to cull hundreds of feral cats that were overpopulating the fishing region, a controversial decision that was changed at the last minute to neutering them.

Stories of cat abusers often generate a lot of buzz, such as a young woman now facing trial for beating her neighbor’s cat and throwing it out of a 10th-floor window.

The growing consciousness toward animal treatment caused the Ministry for Food, Agriculture, Forestry and Fisheries last month to submit a revision to the Animal Protection Law. The change introduces a jail term of up to one year for animal cruelty and doubles the maximum fine to 10 million won ($8,580).

Park Sun-mi transformed the basement of her parents’ house into a shelter for street cats after watching the news on the fate of Geomun Island cats.

The 27-year-old, who is active in the nongovernmental Korean Organization for the Protection of Cats under the pseudonym “potatochip,” now spends 80 percent of her salary on rescuing, taking care of and arranging the adoptions of injured and abandoned cats. Some criticise her, saying she should use her time and money to help humans, but her heart says otherwise.

“Humans can say they are sick. They can ask someone for help,” Park said, stroking a cat named Eno, who was rescued from the habitual violence of its former owner’s boyfriend. “But street cats are at the bottom of our urban ecosystem, the weakest of all beings.”

The stray cat protection movement follows the growing popularity of felines as pets in Korea. While dog imports are staggering, statistics show that more and more cats are brought over as companion animals.

Some $330,000 worth of foreign feline breeds were imported last year, compared to a mere $40,000 in 2008, according to the Korea Customs Service. Imports of cat food also jumped by 112 percent to $6 million. In general, the pet industry here is gaining steam on the back of the increase in one-person households, childless couples and signs of an economic rebound, the customs service notes.

The growing acceptance of cats as companion animals in Korea is particularly noteworthy, considering the traditional perceptions of Koreans. Cats in the past were commonly referred to as “yomul,” meaning uncanny or malicious things.

“Cats are somewhat negative, inauspicious in folklore, with the ability to metamorphose and seek revenge against those who harm them,” said Cheon Jin-gi, who specializes in animal folklore at the National Folk Museum of Korea. “Still, cats were allowed to come inside the house. Dogs were not.”

In old Korea, there was no such thing as pets, Cheon said. All animals raised at home were deemed as livestock, their purpose being to protect the house (dogs), provide labor (cattle) or food (hens).

Park Yong-choon, an animal management official at the Seoul Municipal Government, said there is a sharp divide in animal treatment between young and old.

From 2008 the city government adopted a new policy to control the number of stray cats in the long term by having them trapped, neutered and released instead of being culled. “Young people have a strong idea that street cats should be protected, but the elderly don’t want the cats roaming the streets. They ask us why we bother saving them,” Park said.