The best reality show on earth

The best reality show on earth 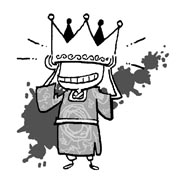 One person’s day of celebration can be another person’s funeral. One example of this drastic contradiction of fate occurred in the ancient Ottoman Empire. On Dec. 22, 1574, Sultan Murad III acceded to the throne as funerals for his five brothers took place one after another.

The sultans of the Ottoman Empire had many wives and concubines, so princes born to different mothers had to engage in a bloody competition to take the throne. Once one of the princes rose to the top, it was customary for the newly chosen king to kill his brothers by strangling them with a silk ribbon. This was a precautionary measure to prevent any possible threat to the throne. When Mehmed III, the son of Murad III, took the throne, he had to kill as many as 19 brothers to secure his accession.

Sometimes, fathers would take action in advance out of concern that the political situation would become unstable after his death. Suleiman the Magnificent, the longest reigning and most prominent sultan of the Ottoman Empire, was one of these fathers. He selected Selim as his heir and eliminated not just all his other sons but also his grandsons. The stability of the empire was a sultan’s primary task, and it was a luxury to think about fatherly or brotherly love.

There is also a theory that Genghis Khan, too, sacrificed his favorite eldest son for the sake of the future of the Mongolian Empire, which he worked so hard to create. The eldest son, Jochi, was born to Genghis Khan’s wife upon her return from being kidnapped by another tribe, and a Kurultai council was held to select the heir. When the second son protested that the Mongols should not be ruled by an illegitimate child, the meeting disintegrated into a fist fight among the brothers. When Jochi died not long afterward, there was a rumor that Genghis Khan was behind the untimely death, as he hoped to prevent a power struggle among his sons.

North Korea is dreaming of extending the regime through a dynastic power succession from Kim Jong-il to his third son. The process has been ridiculed as the “only comedy in the world” and the world’s “best reality show.” A rumor about an attempt to assassinate Kim Jong-nam - Kim Jong-il’s first son - while he was in exile in Macao makes the story even more dramatic. Maybe Kim Jong-il and heir-apparent Kim Jong-un think the throne is secure as long as they eliminate his rivals and dominate the military.

Before Genghis Khan died, he left his sons this piece of advice: “Conquering a nation is different from dominating the military. You can only conquer a nation when you win the hearts of the people.” He also presented a solution: “A leader can never be happy before the people become happy.” But his sons did not live up to their great father’s expectations and failed to maintain the glorious empire. Will Kim Jong-un, who is not likely to get such advice from his father, do otherwise?