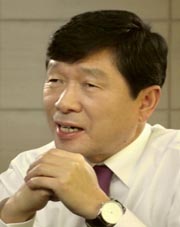 Kim Young-sik, 59, the president of Chunho Food, became something of a celebrity when he appeared in his company’s commercial for cornelian cherries.

The commercial elicits giggles from Korean audiences because the product is supposed to be “good for men,” an idea that is never stated explicitly in the commercial.

Something that is “good for men” is a frequently used euphemism in Korea, generally uttered with a wink and a nod, for things known to boost men’s virility.

The commercial has become such a hit with the public that other companies have copied it for their commercials.

Kim is now instantly recognizable among Koreans, but he wasn’t quite ready for the sudden fame.

“It’s really stressful,” Kim said. “Once when I was at a public sauna a fan recognized me and came over to say hello. I was naked.”

Before he founded the company, Kim was going through a rough time. He was 2 billion won ($1.77 million) in debt and surviving on soju and sausages. He said he even tried suicide.

But it was during this time that Kim wrote something that he would keep with him for the rest of his life: “Run 10 meters more.”

The motto helped him launch his company, which now makes 80 billion won in annual profit and distributes to nine countries.

In addition to his business and lectures to promote the book, Kim has also financed a number of social campaigns, which he advertises on his blog. In one of the campaigns, he gives away 2 million won to anyone giving birth to a third child. Around 100 people have applied for and been awarded the money thus far. Through another campaign, he has given 10 million won to several child heads of household and seniors who live alone.

These days, Kim has a new strategy for success.

“Write your goal on your cell-phone screen,” he said. “Goal, not dream.”

He believes that seeing your goal constantly will motivate you to take action.

What does Kim’s screen say?

“Chunho foods: market success in the U.S. and Japan.”