Former Ewha president is back to her roots

Former Ewha president is back to her roots 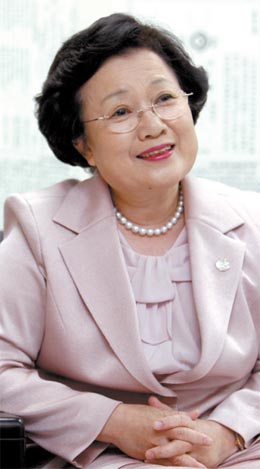 Lee Bae-yong, 63, recently completed her term in office as president of Ewha Womans University, where one of her primary goals was to make the university a more global institution by establishing 20 satellite campuses overseas. She has not only met her goal but has exceeded it, establishing 21 Ewha campuses around the world.

Now, she is channeling her talents into another passion of hers, promoting Korean history.

She believes that educators should not neglect Korean culture and history in favor of other subjects and that history education should be made more engaging. She also thinks that the decreasing importance of Korean history in the College Scholastic Ability Test and other national examinations is problematic.

Lee was the first woman to be the president of the Korean Council for University Education and she is currently serving as the chair of the Korean Education Network, which was formed to strengthen Korean education.

The JoongAng Ilbo sat down with Lee to discuss her plans for improving Korean history education in Korea and abroad.


Q: What do see as the main problem with Korean history education?

A: Korean history education should be mandatory, as Korean language education is. Not many students today know much about the history of their own country. It’s crucial to prepare for the future, and there is no future without history. The foundation for our value system comes from a nation’s culture and historical consciousness. I want students to learn about the leadership of King Sejong. In the 32 years of his reign beginning in 1418, he established a national culture. He made endless efforts to create a culture that embodies the sentiments of Koreans.

There has been criticism about the overly nationalistic nature of the Korean history curriculum. How would you respond to that?

I agree that a multicultural society should seek diversity. Still, it does not change the fact that we are Koreans. We have to embrace and be in harmony with the world but honor our deep rooted traditions and customs.

How can history education be made more interesting or relevant for students?

It is a difficult task, but it is crucial if we want students to learn and be interested in history.

It is crucial that we overcome the limits of multiple choice tests and take a more interesting approach to education.

An ideal method would be to provide a vivid explanation of a historical event at a historical site. With training, teachers can learn to be better storytellers.

Do you have experience with storytelling?

I had a chance to visit Changdeok Palace with members of the Presidential Committee on Social Cohesion to introduce historical scenes. Not many people know that there are rice paddies and a cottage in the back of the palace. This section was created for the king and the crown prince to understand how laborious farming is. Even inside a Joseon Dynasty palace, social integration and consideration were emphasized. When I tell this story to foreigners and even to Koreans, they are all shocked and touched.