Going for the golden ring

Going for the golden ring 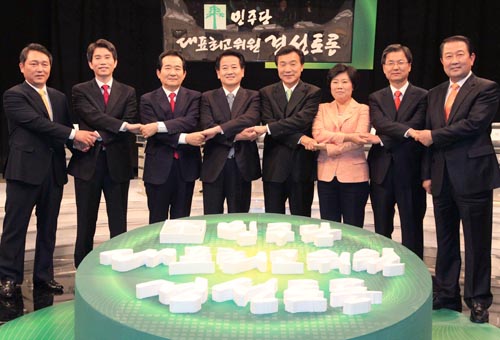 Eight candidates competing in the Democratic Party’s leadership election pose yesterday before a debate hosted by KBS. The largest opposition party will hold a national convention tomorrow at the Munhak Stadium in Incheon and elect a new chairman and other senior members. Chung Sye-kyun, Chung Dong-young and Sohn Hak-kyu have been leading public opinion polls with narrow margins. The party’s most recent leadership, including then-chairman Chung Sye-kyun, stepped down en masse to take responsibility for the Democrats’ losses in the July 28 legislative by-elections to the ruling Grand National Party. [NEWSIS]