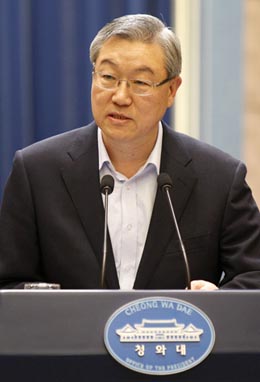 The Blue House quickly moved to announce a nominee for the empty post of Minister of Foreign Affairs and Trade after Kim Hwang-sik was confirmed yesterday as the new prime minister.

Kim Sung-hwan, 56, senior secretary to the president for foreign affairs and national security, was nominated by President Lee Myung-bak yesterday. After passing the foreign service exam in 1977, the Seoul National University graduate served in prominent posts at the Foreign Ministry prior to his current position, heading the North America bureau and serving as second vice minister.

Kim helped build the foundation for stable relations between South Korea and Russia in 1990, which clinched him the North America bureau shortly after.

Recognized for his diplomatic skills, he was later made Korean ambassador to Uzbekistan and Austria. He has assisted President Lee as his senior foreign affairs secretary since June 2008. Kim was deemed the top candidate ever since former Foreign Minster Yu Myung-hwan stepped down last month after a scandal regarding the employment of his daughter at the ministry.

Kim is seen by colleagues as a person who will “get his job done quietly,” and will take over operations for the upcoming November G-20 Summit in Seoul. Kim is also considered a good person to settle the nepotism scandal that rocked the foreign ministry because of his relatively clean record.

According to the presidential office, there are no major problems on Kim’s record other than that he was exempted from military service due to a medical condition.

Because of this, the Blue House conducted a mock confirmation hearing for Kim early yesterday and will move quickly to get him working. Speed is imperative for the government not only because of the upcoming G-20 Summit but also the legislature’s audit on the Foreign Ministry and other diplomatic events planned by the government.

However, there was some concern that the ministry won’t be fully overhauled and reformed under Kim because he has worked there for so long. The Blue House has been downplaying those concerns, citing previous instances in which Kim was asked to favor children of diplomats for prime positions and his refusal to do so.

Hong Sang-pyo, senior public affairs secretary for the president, said he was confident in Kim’s integrity and ability and urged the National Assembly to quickly proceed with confirmation hearings, citing a busy diplomatic schedule, including the G-20 summit.