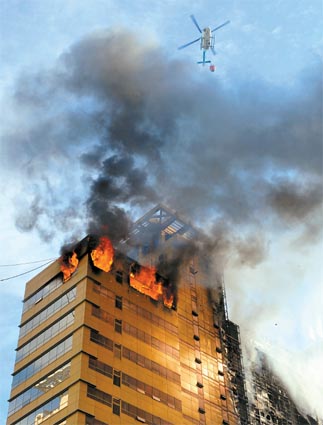 A helicopter tries to put out a massive fire at a 38-floor luxury complex in Busan yestserday. No casualties were reported, but firefighters’ ladders only reached the 15th floor and several residents were rescued by helicopter. [Joint Press Corps]

A massive fire at a luxurious residential complex in Busan, which spread across 33 floors in less than 30 minutes yesterday, shocked the nation and spread fear about the safety of the country’s high-rise apartment buildings, which are rapidly increasing in number and height.

According to Busan police, the fire appeared to have started at a janitor’s garbage collection room on the fourth floor of the 38-story Wooshin Golden Suites around 11:33 a.m. Flames spread quickly through the ventilation shafts in the central stairwell and also along the highly flammable exterior walls of the structure. Within 20 minutes, the blaze reached the tower’s rooftop.

The fire department dispatched 70 trucks and a helicopter to the building, which houses 202 residences. Three choppers from the Korea Forest Service and Army were deployed.

While no casualties were reported as of 5 p.m., chaos during the evacuation process was. A total of 38 residents were rescued from the building by fire authorities, including three who were receiving treatment for smoke inhalation. A 43-year-old firefighter was also injured.

By 2 p.m., the fire was under control, but firefighters continued to battle the blaze into the late afternoon.

The luxurious high-rise opened in 2006 in a newly developed area near the coastal city’s Haeundae Beach. Although the Busan fire department sent ladder trucks, the ladders only reached the 15th floor.

Helicopters were used to rescue ten residents who took refuge on the rooftop. The police said it is investigating the fire’s cause.

Experts said yesterday’s fire was their worst nightmare come true. They said high-rises around the nation are particularly vulnerable to fire because they are built with flammable exterior materials.

“And the flames on the exterior walls were too strong, so the sprinklers weren’t much help,” he said.

Lee said the use of curtain-wall structures and painted aluminum panels on the exterior of the steel-frame fueled the disaster. Although such buildings are relatively safe in an earthquake, it is extremely vulnerable to fire, said construction industry insiders. The paint coating the panels is highly flammable, they added.

Experts also worry that fire regulations have not been updated, although the number of high-rises has increased rapidly. In 2005, 60,000 households lived in apartment buildings taller than 30 stories, but in 2007 it went up to 120,000. This year, 260,000 households are in high-rise apartments.

“Construction companies and building owners oppose stricter safety regulations because it will cost them a lot more,” said a fire department official.