Allies close in on Pyongyang

Allies close in on Pyongyang 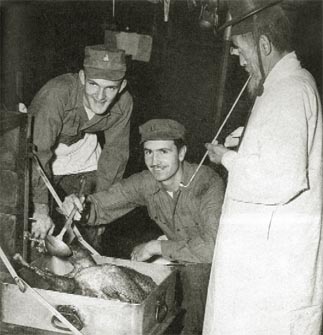 In this undated photo, soldiers of the U.S. Infantry 8th Army cook turkey for Thanksgiving dinner. An elderly Korean man smoking a traditional pipe looks on. Provided by the U.S. Army

In discussing the best way to advance north, Col. William Hennick made a reference to Gen. George Patton and suggested we follow his strategy. I fully understood where Colonel Hennick was coming from, but we did not have any tanks at our disposal and it was difficult to receive tank support from the U.S. Army.

Colonel Henick suggested I request support from Gen. Frank W. Milburn. I hesitated at the thought of requesting help from General Milburn again. I had requested General Milburn change the Pyongyang invasion plan, which had excluded the ROK Infantry.

The allied forces started to head north in early October, 1950 after seizing Seoul. ROK Infantry soldiers ride on top of American tanks as they head towards Pyongyang. [JoongAng Ilbo]

Known for his understanding and generous character, I eventually decided to ask for another favor.

General Milburn decided to provide me with one armored-vehicle company.

Then an unexpected occurrence took place with some ex-soldiers.

A sizeable number of ROK 1st Division personnel - 100 to be exact - came to us looking to rejoin our division. At the onset of the war, they had failed to make their way south along with the rest of the division and were left behind in Seoul, which was then under control of enemy North Korean soldiers.

Many in the division were, for obvious reasons, reluctant to accept the soldiers. Questions came up on how they managed to remain alive in a city under enemy control and their failure to carry out their obligation to fight the enemy.

I held a meeting with the regimental commanders, which turned into a heated debate. Some suggested we could not possibly accept these soldiers based on the grounds that they could have cooperated with the enemy to remain alive. Others argued we had to accept them and give them another chance.

I told them that under the circumstances, it was best to favor unity, leave the past behind and not point fingers. The men joined their respective regiments and performed well, with many of them taking part in missions that were important to our objective.

The next morning, 20 M-26 tanks rolled into our compound.

The sight of the tanks was a huge morale boost for our men.

It was Company C, 6th Medium Tank Battalion. I was directing a tank division for the first time and I was excited with the thought of how we would utilize my new weapons.

With the help of Maj. Park Jin-suk, who was fluent in English, we interpreted a training session for selected members of the 12th Regiment on how to operate tanks. With a full morning of training, our men were able to operate the tanks quite smoothly.

We finally set out on Oct. 12, 1950 and we were soon heading towards Geumchon County just north of Kaesong. I decided to ride on the lead tank. There was the danger of being exposed to enemy fire, but I remained steadfast in my decision, since we were headed to seize my hometown of Pyongyang.

The enemy occasionally tried to ambush us, but we easily thwarted their attempts by using our infantry and calling in for air support.

Our infantry was in poor shape from marching day and night.

It got to the point where a noticeable number of fatigued men with swollen and blistered feet began to limp.

I tried to encourage them as much as possible by yelling, “Pyongyang” and “Ppali ppali [quickly]!”

We needed to constantly be on the move to catch up to the U.S. 1st Cavalry Division, which had set out earlier.

During our difficult march, Col. Choi Young-hee received a battlefield promotion to the rank of brigadier general, becoming the ROK 1st Division’s second in command.

On the afternoon of Oct. 13, our 12th and 15th Regiments seized Sibyeon-ri.

It was an exemplary case of successfully incorporating infantry and armored vehicle regiments. With the news of our important victory, the U.S. 6th Medium Tank Battalion, Company D, voluntarily joined us. It meant that the ROK 1st Division now had immediate access to 50 American tanks.

Our infantry marched throughout the night and the American tank units, feeling a need to rest, would take a brake and catch up with us at the break of dawn.

On Oct. 17, we succeeded in seizing Sangwon, Junghwa County, South Pyongan, which is approximately 30 kilometers (18.64 miles) outside of Pyongyang.

As we got closer to Pyongyang, we met stronger resistance from the enemy. With the American tanks in the lead, we were forging ahead.

At a sudden curve, we were met with 15 enemy tanks. It was a very dangerous situation as we were unprepared for the enemy, which caught us in a blind spot.

The U.S. troops were swift in their handling of the situation. The U.S. tanks took position off the road and quickly fired off rounds at enemy tanks in the lead and rear of the group.

The enemy failed to put up a fight since it all happened so suddenly.

With the rest of the 13 tanks stuck between the destroyed tanks, the allies fired at will. Eventually we began to see our enemies climb out of their tanks in surrender.

Although the North’s Soviet manufactured tanks were formidable when up against their American counterparts, the way in which the North’s soldiers operated the tanks was the decisive factor.

Only one weakness stood out among the American troops - who were a well-disciplined group capable of carrying out orders in an efficient manner - they hated to travel after sunset.

Eating, resting while on the march

An example is when we entered Hwanghae Province after the sun had already set. We traveled roughly 30 kilometers that day. The commander of the U.S. tank regiment suggested we stop and get some rest for the night. I told him we could not stop and must move on. He again stated that his men needed to rest, wash up and get some hot food.

At a later date, the Chinese military took advantage of such a situation and attacked the Americans while they rested at night. They even tried to play with their heads by blowing on horns or smashing together pipes.

U.S. troops were provided with a hot food truck every now and then. They enjoyed their coffee and hot meals, but saved fruit rations until after a battle.

Another interesting sight was the turkey that was delivered in massive shipments from Japan and the United States in time for American Thanksgiving. Frozen turkeys were shipped out to areas in the midst of battle as well. It was in stark contrast to the diet of our troops, who were accustomed to the staple of rice and bean sprout soup. Our treat or snack was geonbbang, or hardtack.

In all honesty, it was not easy to bunk and fight with soldiers who were deemed free-spirited and accustomed to such different habits, but we clicked well.

The ROK infantry led the way by marching at night, and when we were met with enemy resistance, U.S. tank troops came to our support. They also responded well to my command. When they felt the need to intervene, we held meetings to debate the issue and find a compromise. After a resolution was reached, they would not stir the pot and cooperated well as a team, providing only absolute support.

On Oct. 18 near sunset, we reached Jidong-ri, approximately 20 kilometers outside Pyongyang.

It was an ideal area to defend, since there were hills to both sides of the area. If we could manage to get past this area, it would be a wide open road to Pyongyang.

Jidong-ri was the last line of defense before Pyongyang. As expected, the enemy fortified the area and was ready for our advancement.