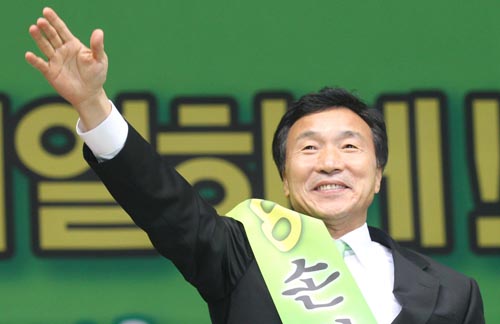 Sohn Hak-kyu responds at the Democratic Party convention in Incheon yesterday after he was elected the new chairman of the main opposition Democratic Party. By Kim Hyung-soo

Sohn, 63, was a former leader of the major opposition Democratic Party, a former legislator of the ruling Grand National Party and a former Gyeonggi governor.

The DP held a national convention after the party’s leadership stepped down en masse in August, including then-chairman Chung Sye-kyun, to take responsibility for the DP’s losses to the ruling GNP in the July 28 legislative by-elections.

In his acceptance speech, Sohn said he vows to take back power for the Democrats in the 2012 presidential election.

“I promise to make the DP a winning political party,” Sohn said. “You just gave me a mission to pioneer the new fate of the DP. We must trust ourselves and ride public desire to take back the presidency. The underprivileged and middle classes will be happy when the DP survives. The DP will turn Korea into a nation in which honest and hard-working people succeed and become rich.”

While eight candidates announced their candidacy for the leadership election, Chung Sye-kyun, Chung Dong-young and Sohn had been leading public opinion polls with narrow margins prior to the national convention. There were projections that Sohn would likely win the chairman post to revamp the DP because he has political experience both in the ruling GNP and the main opposition DP.

While Sohn won the most votes from delegates, he also got the greatest backing from opinion polls, indicating his popularity outside the party. Sohn’s two other strong rivals, Chung Dong-young and Chung Sye-kyun, came in No. 2 and No. 3 respectively.

A native of Siheung, Gyeonggi, former three-term lawmaker Sohn studied political science at Seoul National University and Oxford. He taught at Korean universities, including Sogang, Inha and ChungAng, until 1993 when he was elected as a first-term lawmaker representing Gwangmyeong B of Gyeonggi Province in April 1993 on the ticket of the Democratic Liberal Party - predecessor to the Grand National Party.

He was appointed health minister in 1996 and he served as Gyeonggi governor between 2002 and 2006 with GNP membership. But he left the GNP in March 2007 to protest what he called an “unfair” GNP presidential primary, in which he ran against President Lee Myung-bak and former GNP chairwoman Park Geun-hye during the last presidential election. Sohn joined the presidential primary of the opposition Democratic Party, but he lost to Chung Dong-young.

Sohn can now name two members to the party’s Supreme Council, in addition to five elected yesterday. One seat in the council is earmarked for a woman and was given to Cho Bae-sook.