Four rivers work ahead of schedule

Four rivers work ahead of schedule 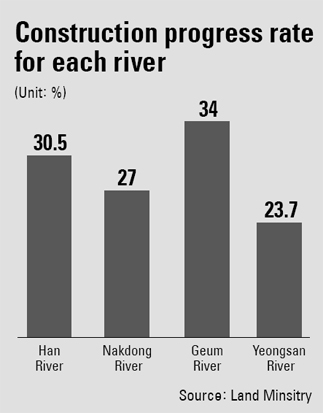 The government’s ambitious four rivers restoration project is progressing at a rapid pace, despite the ongoing political controversy over its legitimacy. The Ministry of Land, Transport and Maritime Affairs said yesterday that an average of 51.3 percent of the irrigation work has already been completed, 10 months after its groundbreaking.

Also, according to the ministry, 28 percent of the overall construction of the four rivers project has been completed as of last Thursday, with the progress rate 5 percent faster than its initial 26.6 percent aim.

The construction progress rates differ according to each water system of the four rivers: the Han (30.5 percent), Nakdong (27 percent), Geum (34 percent) and Yeongsan (23.7 percent).

“The construction’s completion rate will be raised to 60 percent by the end of this year and will install necessary structures and floodgates before June of next year,” said a ministry official. He also added that a trial operation will be held around that time.

As for the progress over dredging, the ministry said it has already scooped up 32.2 percent of 167.6 million cubic meters of the total planned 521.1 million cubic meters of ground. This makes the progress 10 percent faster than scheduled. Considering that Seoul’s Mount Namsan is 50 million cubic meters in volume, the government has already taken out three times the volume of Mount Namsan’s soil in only 10 months. The four rivers project has been a political hot-issue debated by the National Assembly’s ruling and opposing parties ever since the Lee Myung-bak administration introduced the project in November of last year. The project’s aim is to refurbish Korea’s four rivers by 2012, which is meant to help prevent floods and attract tourists to the regional areas. Critics, on the other hand, argue that the project will hamper the environment and ecosystem.