A final showdown in series

A final showdown in series 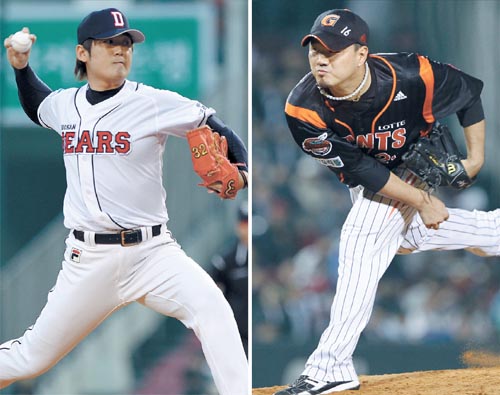 Kim Sun-woo of Doosan, left, and Song Seung-jun of Lotte are expected to start in the deciding game of the first-round playoff series tonight. [YONHAP]


It all comes down to one game: the fifth and deciding game of the first-round playoff series between the Doosan Bears and the Lotte Giants will send one team packing. The two pitchers tabbed to start the crucial game tonight are Kim Sun-woo of Doosan and Song Seung-jun of Lotte.

Kim and Song are good friends, having spent several seasons playing together in Major League Baseball. Both players signed free-agent contracts with the Boston Red Sox, Kim in 1997 and Song in 1999. Kim was a sophomore at Korea University at the time and Song had graduated from Kyungnam High School.

Kim pitched for the Red Sox in the 2001 and 2002 seasons and Song made his mark with the Red Sox’s single-A affiliate Sarasota, being named to the 2001 All-Star Futures team. In 2002, Kim and Song were traded to the Montreal Expos in exchange for Cliff Floyd.

The two played together until 2004 when they parted ways in the MLB. Song eventually signed with the Lotte Giants in 2007 while Kim, who pitched for four teams in six seasons, signed with Doosan in 2008.

Both players are coming off career-best seasons. Having collected 11 wins last season, Kim went 13-6 with a 4.02 ERA this year to further solidify his case as the team ace. Song posted 13 wins last season and did even better this year with a 14-6 record.

The two aces continued their fine form into the postseason. Despite suffering from tonsillitis and a fever until the night before the start of the series, Song took to the mound in the opening game against Doosan and pitched 5 1/3 innings and held the Bears to five runs on eight hits. Song also provided relief work out of the bullpen in game three on Saturday.

Kim had a sterling outing in game two, giving up four hits in seven innings of work with one unearned run due to an infield error.

Both players are coming into the game in poor shape. Song has been receiving treatment for his tonsillitis since Friday, while Kim is suffering from a nagging left-knee injury.

“The fever has subsided but I feel pain every time I swallow,” Song said. “The doctor recommended I have my tonsils removed at the end of the season.

“I’m prepared to pitch a better game than the performance I had in game one.”

Kim, meanwhile, had to tape his left knee before entering games recently, but is determined to provide his team with a chance at winning the series.

“I will look to help my team continue its winning streak,” said Kim.

With two consecutive wins in Busan over the weekend, the momentum has shifted in Doosan’s favor. The heart of Doosan’s batting order came to life over the weekend and its bullpen, consisting of Les Walrond, Lee Hyun-seung and Ko Chang-sung, are providing solid relief.

Lotte faces the difficult task of trying to win at Doosan’s home field. Having won the opening game of the first round of the playoffs last season before losing three consecutive games to Doosan, they have the added pressure of knowing another first-round exit will in all likelihood mean the end of manager Jerry Royster’s three-year tenure with the Giants.

The winner of the series will play the Samsung Lions in a best-of-five series starting on Thursday in Daegu.