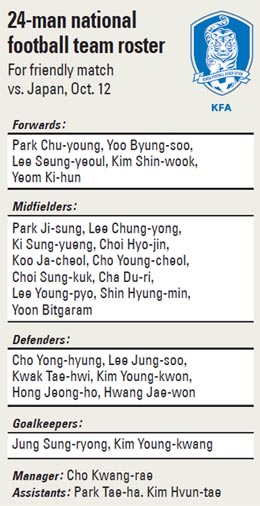 There will be some familiar faces from the K-League making their return to the national football squad against Japan on Oct. 12 in Seoul.

“Players like Kim Shin-wook, Yoo Byung-soo, Koo Ja-cheol and Choi Sung-kuk, among others, are capable players with many positive features to their games,” said Cho at a press conference yesterday. “I’ve been watching their play in the K-League consistently and selected them because of their solid play.”

Yoo currently leads the league in scoring and has notched 17 goals for Incheon United so far this season. Kim Shin-wook is a former defender turned forward who at 196-centimeters (6 feet 4 inches) and 96 kilograms (212 pounds), provides Cho with much needed height and size up front. Kim has played well of late, scoring two goals and assisting on another against Daejeon over the weekend and has scored six goals this season for Ulsan Hyundai.

Choi Sung-kuk, known for his speed and creativity on offense, was selected to the national team for the first time in two years. Despite lacking support, Choi has recorded four goals and two assists for the Gwangju Sangmu.

Cho went on to state that he will utilize his captain, Park Ji-sung, in a different role in the upcoming game.

In an effort to provide a spark to a lackluster offense, Park was featured prominently in Korea’s attack in its previous friendly games against Nigeria and Iran.

“There will be some changes in the midfield,” said Cho. “In an effort to utilize Park Ji-sung to the best of his abilities, I will use him in the midfield.

“It’s difficult to say at this point since it’s a rivalry match but I will discuss the matter and decide on a specific position with Park when he returns to Korea.”

Cho also said he will make some changes to the defensive formation in response to Japan’s attack, featuring Takayuki Morimoto and Keisuke Honda.

Cho prefers the three-back formation with Lee Young-pyo and Cha Du-ri providing support as wingers but the strategy did not work well for Korea in its friendly against Iran.

Despite being tabbed as Japan’s new manager, due to visa complications, Alberto Zaccheroni will have his debut match against Argentina in Saitama on Friday. The friendly against Korea will be Zaccheroni’s second match while Cho a 2-1 record in three games as national team manager heading into the match against Japan.

Korea holds an edge in the all-time matchup between the two countries with 40 wins, 20 draws and 12 losses.

Korea won the first of the home-and-away friendly series between the two countries in Saitama on May 24, 2-0, and also won the East Asian Football Federation match against Japan in Tokyo on Feb. 14, 3-1.

The upcoming friendly match will be the national team’s last match before the 2011 Asian Cup in Qatar in January.