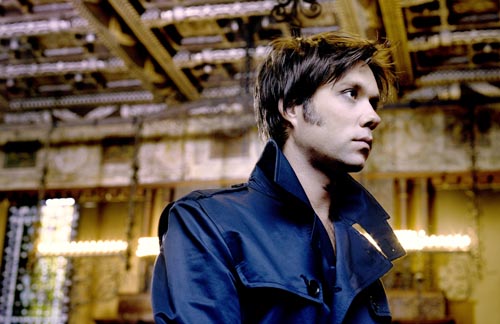 
After six original full-length albums, a notorious drug phase and the death of his mother, it seems Canadian singer-songwriter Rufus Wainwright has come full circle with his latest effort, “All Days are Nights: Songs for Lulu.”

Departing from the opulent, romantic orchestrations of his previous album, “Release the Stars,” Wainwright returned to the sparse yet melodic song arrangements that are heavily reliant on piano, with a hint of influences from opera and the theater that made him famous in the first place.

Twelve years have passed since his first, self-titled album was released and Wainwright no longer playfully sings such lyrics as “If I should buy jellybeans/I have to eat them all in just one sitting,” during “Cigarettes and Chocolate Milk” in his second album. The 37-year-old musician has grown up and experienced loss, abandonment and remorse, which is apparent throughout the 12 songs on the new album.

The singer’s eclectic mix of passions, including for the opera, Judy Garland, pop music and theater, have led him on an intriguing and bold musical career, including a full-length tribute album to Judy Garland in 2007 titled “Rufus Does Judy at Carnegie Hall.” During a one-on-one phone interview with the JoongAng Daily before his first show in Seoul on Oct. 10, Wainwright openly shared his feelings about his excitement to perform in Korea for the first time, the recent death of his mother, his love for Verdi and how listening to opera saved him.


Q. As a long-time fan of your music, I was delighted and a bit surprised to hear that you are visiting Seoul. Are you excited to come here?

A. I’m always excited to go to far and exotic places, especially in winter, which is starting here in New York. So it’s nice to go to Australia and New Zealand on this tour because it’s warmer there.

But I do have to say I’ve never been to Korea and I’ve always dreamt of going there, especially for the food. I’m a big Korean food fan. I’m always thrilled to go to a new country. Korea is making me awake.

Referring to the “operatic” feel of your music, many people describe your style as “baroque pop” or “popera.” Do you agree with your songs being described in these terms?

Handwritten lyrics for his hit song ‘Martha,’ his sister’s name, are inside the album jacket.

Well, opera was always a huge influence to my music, so I agree with it. But it is fascinating how distant the opera world is from the pop world. For instance, when I did my opera in England and Canada, I learned that at least half of the audiences, I would say, have never been to any opera. I’m happy to show people new kinds of expression. It’s all music in the end.

I think opera saved my life several times. Listening to opera gave me so much hope and desire to grow and develop and become a man. The first time was as a young teenager, when I was 13, 14, I discovered my sexuality at a very young age. And there was no doubt about it. I knew it wasn’t a phase. Unfortunately, AIDS was entering the scene and basically to be gay was to die. It was the mid-‘80s to the late-‘80s. It was a tough time. That’s when I discovered opera. Opera really dealt with a lot of these big issues, you know, whether it’s abandonment, forgiveness or impossible love. So it spoke to me about those big issues.

What other times did opera save you?

The second time was with a drug addiction that I acquired when I appeared to be crazy, shall we say. I had a lot of fun and was very creative, then it got to a point it became very dangerous. I could’ve died actually. At that point, opera came back and it just occurred to me that for me to fulfill my dream of writing an opera - if I wanted to become a real composer - I couldn’t waste my time on drugs. So that was the second time. And the third time, of course, is the death of my mother. I mean, we were big opera fans together for many years. In the last three years of her life, we often went together to see operas. And often times, operas told us what was really happening and helped us through the subjects we didn’t necessarily want to talk about. So I’ve been very blessed to have opera in my life.

Who are your biggest musical influences?

On the opera side, my biggest influence is Verdi, the composer. He is sort of my opera daddy. (laugh) I love his sense of melody and I also love the way he developed as a composer, and his attitude toward art. It’s fascinating how he managed to be very deep but also popular at the same time. He wrote good works until he was a very old man. I would like that for myself. I think in the pop world that would be Nina Simone - because she gave me a lot of encouragement about singing with piano and making it its own creation.

How has the new album, “All Days Are Nights: Songs for Lulu” been a departure from your previous albums to date?

There are several reasons that I made this album differently. I always threatened to do something like this. When I started to make “Release the Stars” (his fifth album) I sort of said, “I’m going to strip this down and make it more bare-bone, kind of a darker sound.” Then, of course, it backfired and I ended up making a very lush and romantic album. (laugh) It wasn’t time for that. But it did demonstrate the basic idea inside my head.

What was the basic idea?

When this album came around, all the elements were fit to the concept. First of all, just to be practical, we live in a recession. There’s a serious economic downturn. So everything is being cut back. Everybody has to pull their belts to survive. So, for me to return to piano was that I was doing what everybody else was doing in life. It’s an album for this time. Also, my mother was dying. And piano became a kind of surrogate to her. Because she played piano and it was communication with her soul and her identity. I could protect myself with piano and it played a role of anchor. I’m very much satisfied with the result.

I’m aware that this album is the first one you’ve made since you lost your mother. All throughout the album, I was quite haunted by the emotions you conjure up regarding the idea of solitude as well as family. What kinds of things pop up in your head when you think back to your relationship with your mother?

My mother passed away in January. One of the climaxes of my family’s story was that we did this incredible Christmas concert in London at Royal Albert Hall which is a very famous and huge hall, about 6,000 people. We did this show with all the family members and friends. She died only about a month later. But it turns out that in the history of Royal Albert Hall, there’s never been that many people in that room. We sold it out more than anybody in the history of almost 200 years old. So I think it was an amazing end of the first chapter of my family and it helped me a lot with my mother’s death.