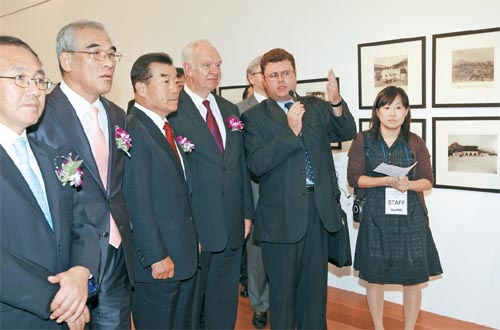 From second left, Choe Kwang-sik, director of the National Museum of Korea, Lee Ki-su, president of Korea University and Konstantin V. Vnukov, the Russian ambassador to Korea, attend the exhibition ‘Russia: reunion with a neighbor.’


To mark the 20th anniversary of the establishment of official diplomatic ties between South Korea and Russia, an exhibition at the Korea Foundation Cultural Center in Seoul on the 100-year-plus link between Korea and Russia is displaying photos, documents and videos to help explain the past, present and future of the relationship.

The Korea-Russia Dialogue is behind the exhibit, titled “Russia: reunion with a neighbor,” which started Sept. 29 and ends Oct. 12.

The exhibition displays about 100 historical items in three halls - some of which are being shown to the public for the first time.

“Many historical records tell us that Korea and Russia have more than 100 years of history of cooperation,” said Konstantin V. Vnukov, the Russian ambassador to Korea, at the exhibition opening ceremony.

“Now we aim to develop ‘strategic accompaniment’ with Korea, taking this opportunity to open this exhibition,” he added.

The three exhibit halls are named “Meeting,” “Missing” and “Going together,” and all three show the relationship between the two countries.

The two countries officially started diplomatic ties in 1884, but relations were interrupted during the Japanese colonial period. Ties were re-established in 1990, a signal that the Cold War was coming to a close.

Ha Gye-hun, the director of the exhibition, explains the life of Viktor Tsoi. [YONHAP]

The first hall of the exhibit displays items from before colonization, such as presents from Emperor Gojong to Nikolai Aleksandrovich II in 1896. Also exhibited in the first hall are 95 scenery photos from the northern region of Korea taken by a Russian geography expedition.

The second hall displays records and documents behind the interaction between the two countries during the Japanese colonization of Korea and a poster of Soviet rock musician Viktor Tsoi, born of a Korean father and Russian mother in 1962. A group of traditional Russian Matryoshka dolls line the center of the third hall, along with pictures showing the modern history of countries’ relationship.

“The relationship between Korea and Russia has been developed in various sectors: politics, economy, culture and other societal areas,” said Lee Ki-su, the president of Korea University, which supported the exhibition.

“The exhibition [demonstrates] the positive relationship between the two countries,” he added.

“We have recently found some documents that reveal records of Korean patriot Ahn Jung-geun and his activities for the independence for the Joseon dynasty during the Japanese colonization,” Vnukov said. “After a few days of translating the documents, they will be released to the public.”

Russia played a major role in Korea’s modern history, especially with its relationship with North Korea. Russia is a member of the six-party talks and also helped the South in advancing its space industry. It invited Yi So-yeon - the second Asian woman to travel to space - to Russia and assisted with the launch of Korea’s first two-stage rocket, KSLV-1, in 2009.

Experts say Korea should regard Russia as a diplomatic partner to establish peace on the Korean Peninsula.

“[After] 20 years of diplomacy, [it is time] we stop seeing Russia in the respect of the Cold War,” said Hong Wan-seok, the chief researcher of Russia studies at Hankuk University of Foreign Studies.