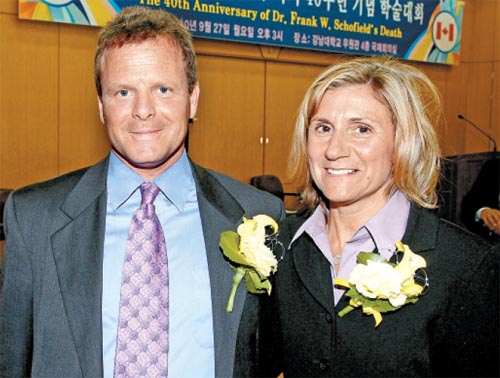 Dean and Lisa Schofield, the grandchildren of Frank William Schofield - a Canadian activist who fought for Korea’s independence during the colonial period - participate in a forum honoring their grandfather. By Cho Yong-chul


Frank William Schofield was a Canadian professor and activist for Korean independence during the Japanese colonial period and reported to world the massacre of Koreans in Jaeam-ri, Gyeonggi, by the Japanese police in 1919. He was honored at an academic forum held in Kangnam University on Sept. 27, the 40th anniversary of his death, with the participation of his grandchildren, who came from Canada.

His grandchildren, Dean Schofield, 57, and Lisa Schofield, 49, were greeted at the forum by Chung Un-chan, former prime minister of Korea, and Kim Keun-tae, a senior adviser to the Democratic Party, who both received scholarships from Schofield when they attended high school.

“I always wondered what kind of place Korea would be since my grandfather called it ‘his hometown,’” Dean said. “My parents told me that he did a great job in Korea.”

Schofield came to Korea in 1916 as a 23-year-old medical professor and missionary. Korean historians have called Schofield “the 34th national representative” - in reference to the 33 independence activists who led the 1919 March 1st Independence Movement - because of his dedication to Korea.

Schofield disclosed the massacre of Jaeam-ri in 1919 when Japanese police shot 22 people in a church, which caused an international outcry. He was the first foreigner to be buried by the Korean government at Seoul National Cemetery.

He encouraged many Korean independence activists by visiting them in jail and he even adopted a Korean name, Seok Ho-pil.

Participants at the forum said the Korean government has not yet held a national memorial service or other event honoring Schofield, despite his influence on modern Korean history.

Yoon Shin-il, the president of Kangnam University, said that they arranged the forum to shed light on his dedication to Korea. At the event, Schofield’s grandchildren spoke about his life.

“We remember him as a simple and humble worker,” Dean said. “Whenever he had some money, he gave it immediately to people in need.[But my grandfather’s] life in Korea is still obscure for us. We hope we can learn about what he did in Korea because of this trip.”

Said Chung: “Thanks to the scholarships he provided me, I could graduate from middle school and high school despite poor circumstances. I want to carry on the lesson he taught me to select students from humble families and encourage them to succeed in society.”