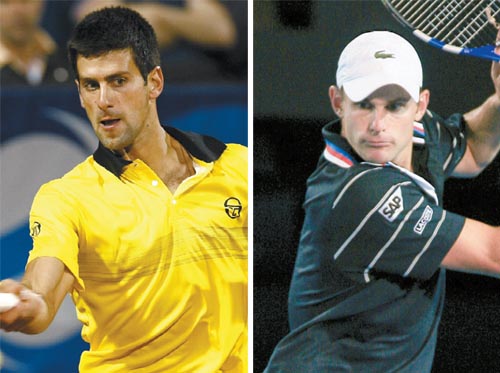 
Hyundai Card invited some big-name superstars from the tennis world - Novak Djokovic and Andy Roddick - to Korea for the 11th Super Match at Jamsil Students Gymnasium on Oct. 2.

The highly anticipated match continued what has become a great event for Korean fans. The series dates back to 2005, when Maria Sharapova faced off against Venus Williams. In 2006, world No. 1 Roger Federer took on No. 2 Rafael Nadal, while the match in 2007 featured Federer against Pete Sampras. Djokovic has become a big name in the sport of tennis, moving his way up to No. 3 in the world rankings and winning the 2008 Australian Open, among other accomplishments. He has built a solid reputation over the years, winning the hearts of legions of adoring tennis fans.

Roddick is no stranger to the spotlight either, bruising opponents with serves that reach up to 240 kilometers per hour. He won the 2003 US Open and took the No. 1 spot in the rankings that year, though he has struggled to match those feats ever since. This could be the year for Roddick, however, as he won the 2010 Sony Ericsson Open and is moving closer to recovering his past glory. Roddick has a way to go, though, as he is currently ranked in the ninth spot.

“We are very excited to be able to present this big match between two of the world’s top players to tennis fans in Korea,” an executive from Hyundai Card said. “We strive to present the best aspects of tennis with exciting games and various events.”

The highlight of this year’s match came late in the series, when each player had to imitate a well-known star from the tennis world. Djokovic is for his imitations, but Roddick stole the show this time around, doing a spot-on impression of the great German player Boris Becker. He then switched into his impression of Andre Agassi, followed by an imitation of Sampras. The climax came when both players imitated Nadal. Roddick rolled up his sleeves and imitated Nadal’s unique jumping style, while Djokovic responded by imitating the tennis star’s warm-up routine.

Roddick and Djokovic then imitated each other’s styles and habits.

“I’m satisfied with the game and had a lot of fun,” Djokovic said. “I’m glad we could do something to bring the Korean fans together. I have to leave soon because I have other matches lined up, but I want to come back to Korea some day.”

Roddick offered some accolades to his competitor. “Djokovic is well known for his imitations of other players, but I practiced as well,” Roddick said. “I enjoyed the game and the response from the audience.”

Hyundai Card offers a whole host of information related to the Super Match XI and other tennis events at its official Super Series Blog (http://www.superseries.kr/) and also through its Twitter feed (@HyundaiCardWeb).