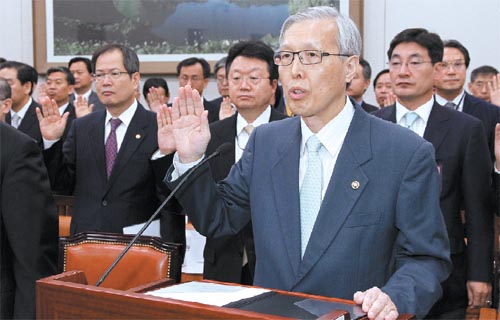 
Despite the government’s efforts to upgrade its diplomatic corps, foreign language skills of Korea’s diplomats are steadily declining. And in some Korean missions abroad, such as Tehran and the Vatican, not one envoy can speak the local language.

Since 2000, the government has been trying to improve the Ministry of Foreign Affairs and Trade’s performance by breaking away from recruitment based on the standardized foreign service exam and ramping up a “special selection process,” in which candidates are chosen on the strength of their resumes, interviews, and for special qualifications, particularly foreign language skills.

But according to Foreign Ministry records obtained by Grand National Party Representative Kim Hyo-jae yesterday, scores for the Test of English Proficiency developed by Seoul National University have been falling every year for ministry employees who are required to take the test yearly.

An English oral proficiency test taken by civil servants above the fifth-grade rank has shown the average falling from 68.64 percent in 2008 to 65.11 percent last year. This year the average bottomed out at 64.37 percent.

Average points for second languages other than English, such as Japanese, Chinese and French, have fallen for all ministry workers from 69.57 percent in 2008 to 66.10 percent in 2009 and 64.37 percent this year.

The Foreign Ministry was also found to have sent abroad 65 diplomats whose English proficiency scores were below requirements. Ministry regulations state that officials who do not meet the foreign language proficiency requirements cannot be dispatched abroad.

“Although the number of Foreign Ministry workers has increased from 1,943 in 1991 to 2,188 last year thanks to the special selection process, foreign language abilities have deteriorated and a third of the legations abroad have less than half of their staff speaking the local languages,” Representative Kim said.

“Embassy councilors are required to take English proficiency exams just once every ten years,” the lawmaker said. “The exams should be given once every two or three years.”