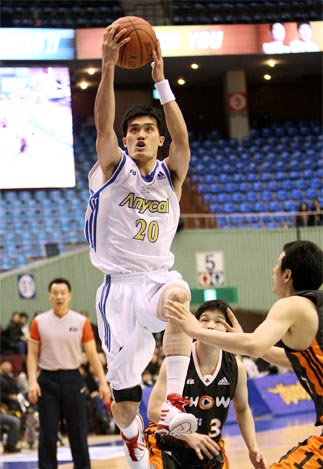 Samsung Thunders forward Cha Jae-young is eager to shed his label as a promising young player.

The 26-year-old is fundamentally sound and athletically gifted but has yet to earn a spot in Samsung’s starting five.

“It has been three years,” said Cha with a bitter smile. “I remember stating in a preseason interview last year that I would do better. It’s a bit embarrassing to be making the same statements again this year.”

Samsung selected Cha out of Korea University fifth overall in the 2008 Amateur Draft. His quickness, flamboyant style and agility had the Samsung front office expecting great things from the young player. Many compared Cha to the athletic Kim Hyo-bum of Mobis Phoebus.

However, Cha failed to live up to the hype early on in his career. Cha could not earn a starting spot past older players like Lee Kyu-sup, Kim Dong-uk and Kang Hyuk. While other first-round picks from the 2008 class - players like Ha Seung-jin, Kim Min-soo, Kang Byung-hyun and Yoon Ho-young - earned significant minutes with their respective teams and solidified their cases with strong play, Cha began to fade from the periphery of basketball fans.

“It hurt my pride,” Cha said. “I’ve not had a proper night of sleep in the past two years.

“Our head coach tells us that he just can’t trust me with a starting role yet. I need to be able to deliver in the clutch like Kang Hyuk.”

Samsung’s head coach usually used Lee Kyu-sup as his starting small forward. When he needed a strong defensive effort from the three spot, he would insert Kim Dong-uk as his starter.

As a result, Cha was limited to an average of 16 minutes in his first two seasons in the KBL.

Frustrated, Cha decided at the end of last season to serve his mandatory military service. But Samsung’s front office stepped in.

“Team officials told me they wanted me to play another season before I served the country,” Cha said. “They said they needed me in order to win the title. I also want to help my team win a title before I serve my country.”

Cha will be provided with opportunity he so desperately longed for. Lee Kyu-sup, along with Lee Seung-joon and Lee Jung-suk, will miss the first 10 games of the season because of their participation on the national team at the 2010 Asian Games in Guangzhou, China.

Not only will Cha receive more playing time but Cha will get an opportunity to establish himself in the lineup and challenge Lee Kyu-sup for the starting role when he returns from the Asian Games.

Timing could not have been better for Cha, as he is finally clear of the lingering effects of injuries that had hampered his play in the past.