In break from the past, Hi Seoul goes non-verbal

In break from the past, Hi Seoul goes non-verbal 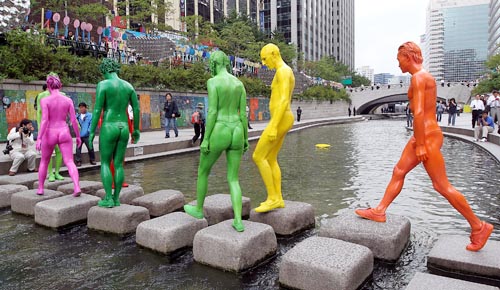 A performance group dressed only in green, purple, red, blue and yellow take a stroll down the Cheonggye Stream on Monday, much to the delight of office workers on their lunch breaks. [Yonhap]


Hoping to draw broader interest from Koreans and tourists alike, the annual Hi Seoul Festival is trying something new this year.

By putting on mostly non-verbal street performances, it is encouraging the public to become active participants, rather than passive observers.

People will get the chance to participate with street acting troupes that will engage the public with their performances. There will also be mimes, a circus and puppet shows. The performance groups are composed of 70 teams from 13 countries, including France, Australia and Spain, and more than 200 performances for this seasonal cultural festival are scheduled.

One performance, if you can call it that, already caught the eyes of downtown Seoulites: a group of people painted in full-body solid colors took a stroll down Cheonggye Stream on Sunday and Monday, much to the delight of office workers on their lunch breaks. 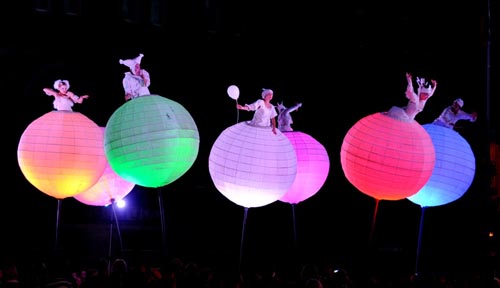 The performance “The Sphere” will be featured in Big Top Village, Yeouido Hangang Park on Friday.


Some of the performances get weirder.

Another group will roam the streets with their heads in watering cans.

Taking the cake is a group of performers that plan to recreate the miracle of human birth by rising from giant spheres resting atop tall swinging poles.

Care for a scream? Then check out “Oh, Everyone,” in which Transe Express from France will ask 500 people to scream across the Han River.

On the last day of the festival, a short parade that epitomizes this year’s theme of inclusivity will make its way across Jamsu Bridge. Everyone is welcome to walk along with the performers.

This year marks a divergence from previous Hi Seoul festivals because it is less centered around the City Hall area.

There will be concerts, too. Seonyudo will become a center of music for renowned music director In Jae-jin, as he puts on “Jazz in Seonyudo.” 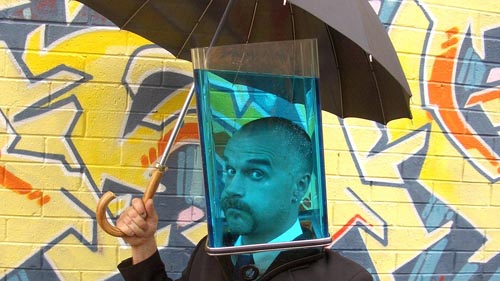 The performance “Waterheads” will be held today and tomorrow around Cheonggye Stream and Friday at Yeouido Hangang Park. Provided by the organizer


Also, 12 visual artists expected to lead the next generation of the arts will exhibit their installation work, entitled “Osaekchanran,” which translates into the five cardinal colors: blue, red, and yellow plus white and black.

Taking a more macro approach, the Hi Seoul Festival unifies 20 ongoing festivals around the country that are happening at the same time.

The Andong Maskdance Festival, Seoul Performing Arts Festival, Jeongju International Sori Festival, the 5th Theatre Olympics in Seoul and the Seoul Design Fair are being promoted under a united banner.

The budget for this year’s festival has been cut by 13 percent, forcing organizers to come up with more creative content compared to previous years.

Major domestic NGOs, including the Beautiful Foundation and Good Neighbors will hold an open market.

The festival, which started in 2003, has been popular over the years. In 2009, more than 2.2 million people went to and participated events. This year, officials hope more than 2.5 million participants turn out to participate.

The Hi Seoul Festival is hosted by the Seoul Foundation for Arts and Culture and the Seoul Metropolitan Government and will last until Sunday.

Admission is free for all performances.

*For more information or to make reservations, go to www.huseoulfest.org, or www.sfac.or.kr.