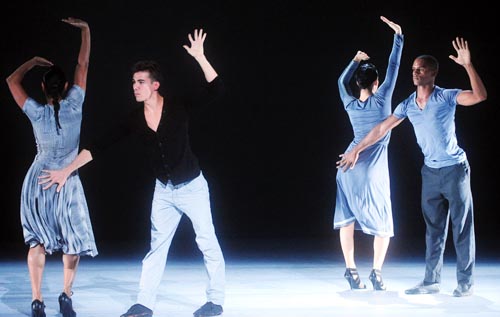 DanzAbierta’s ‘Malson’ is part of the Seoul International Dance Festival, which runs until Oct. 20. [NEWSIS]

Saturday: The Budapest Festival Orchestra under the baton of director Ivan Fischer will perform on Saturday. The orchestra was formed in 1983 by Fischer and pianist Zoltan Kocsis to draw top Hungarian musicians. After two decades, Hungary’s Ministry of Education and Culture designated the orchestra a national institution and offered financial support. The orchestra is ranked as one of the world’s best along with the New York Philharmonic Orchestra and Boston Symphony Orchestra.

The guest artist is pianist Hai Kyung Suh, who will play Tchaikovsky’s “Piano Concerto No. 1.”

Oct. 23: Leading Asian pop stars will gather in October to give Seoul a festive mood ahead of the G-20 Summit in November.

The Asia Song Festival is an annual pop music event in Korea and all proceeds will be donated to Unicef and earmarked for children in flood-stricken Pakistan. A total of 15 artists or bands from seven countries will participate, including Korean pop diva BoA. The tentative lineup also features Jane Zhang, dubbed China’s Mariah Carey for her high octave range, Taiwanese singer and entertainer Joe Cheng and Malaysian singer-songwriter and Asia-wide sensation Michael Wong.

Oct. 26: Israeli violinist Itzhak Perlman will perform in Seoul as part of the HyundaiCard Super Concert program. This will be the well-known virtuoso’s first concert in Korea in 19 years.

To Oct. 30: This festival has established itself as one of Asia’s major opera events since its inception in 2003. This year’s festival includes productions from Korea and abroad and opens with “Faust.” The program also features “Eugene Onegin,” “The Barber of Seville,” “Andrea Chenier,” “The Merry Wives of Windsor,” “The Marriage of Figaro,” “Simsan Kim Chang-sook” and “La Traviata.”

From Seoul, take a bus or KTX to Daegu.

To Sunday: The original cast from Richard O’Brien’s original comedy musical “The Rocky Horror Show” is performing in Seoul until October. The cult classic has been performed on stage for millions of people around the world and has been made into a film. For the first time ever, the original cast is in Seoul. Admission fees range from 66,000 won to 110,000 won.

To Nov. 14: SPAF 2010 will feature a variety of breathtaking performances, including plays, dance and combination works by 28 groups from eight countries, including Russia, France, Switzerland, Belgium, Poland, Lithuania, Bulgaria and Korea.

Open run: Based on the movie of the same name, and with music by Elton John, this musical has been a mega-hit worldwide. This is the first non-English language production of the show, which was previously produced in Britain, Australia and the United States. Four men will alternate in the title role, including Im Sun-woo, who is the youngest person ever to play the character.

It was nominated in 15 categories at the 2009 Tony Awards and ended up winning 10 of the major awards, including best musical.

Performances are at 8 p.m. from Tuesdays to Fridays and at 2 p.m. and 7:30 p.m. on Saturdays, Sundays and holidays. There is no performance on Mondays.

From tomorrow to Sunday: Cheoyong is a ritual court dance performed to ward off evil and to invite good luck. In 2009, this dance from the Unified Silla period was inscribed on Unesco’s Representative List of the Intangible Cultural Heritage of Humanity. The four-day festival features 52 companies from 17 different countries and 64 performances in genres ranging from traditional Korean music, theater and dance to B-boying.

From Seoul, take a bus or KTX to Ulsan.

Oct. 16 to 17: This festival celebrates pansori, traditional Korean narrative singing, and the contributions of legendary pansori singer Park Yu-jeon. Park was one of the nation’s best pansori singers, an accomplishment he was able to achieve through the support of King Gojong and his father, the Daewongun. The festival program includes performances of Korean traditional music, exhibitions displaying artifacts related to pansori and other items.

From Seoul, take a bus to Boseong Terminal.

Today to Sunday: The Gimje Horizon Festival is a feast for visitors to experience the joy of the harvest in the beautiful rural environment of the Honam plain, the largest grain-producing region in Korea. Programs include rice harvesting and crop farming, kite making and flying, folk games and a temple stay at the famous Geumsan Temple.

Movie theaters in Haeundae, Nampo-dong and other areas

Tomorrow to Oct. 15: The Pusan International Film Festival is Korea’s first and one of Asia’s largest film events. A total of 308 films from 67 countries will be shown in five theaters in Busan.

The 15th PIFF will feature nearly 100 world premiers. “Under the Hawthorn Tree,” a film by Chinese director Zhang Yimou and starring Zhou Dongyu and Shawn Dou, will open the festival.

To Oct. 17: Head out to Buyeo and Gongju to learn about the cultural heritage of Baekje, one of the Three Kingdoms of old Korea. Today, the region is home to Buddhist temples, royal relics and more.

The festival features two special events. One entitled “A Day at Sabi Palace” offers a re-enactment of royal ceremonies such as the king’s parade, coronation and welcoming party for envoys. “A Day at Ungjin Fortress” offers hands-on cultural activities to help visitors understand the Baekje era.

Some of Baekje’s long-unseen relics will also be put on display in a related exhibition. The festival’s closing ceremony will be held Oct. 17 from 5:30 p.m. to 8 p.m.

From Seoul, take a bus to Gongju or take the KTX to Daejeon Station.

Daegu Culture and Arts Center, the Bongsan Cultural Center and other venues

To Oct. 24: The Daegu Photo Biennale will exhibit works by more than 240 artists from 22 countries, most of which are Asian or European.

The main exhibition of the biennale has the title of “true(E)motion,” and the titles of the subexhibitions are “Seconds of Life,” “Breaking the Edge” and “Helsinki School.”

The “Helsinki School” section exhibits works by the most well-known artists to come out of the school, including Ulla Jokisalo and Jorma Puranen.

To Nov. 7: The biannual contemporary art show in the southwestern city features photographic, installation and media works by about 120 artists from 31 countries. The title of the biennale is “10,000 Lives,” or “Maninbo” in Korean, after the epic poem by renowned poet Ko Un.

Seoul Museum of Art and more.

To Nov. 17: This showcase is focused on new media art.

Busan Museum of Art and etc.