A thrilling win for Europe at Ryder Cup

A thrilling win for Europe at Ryder Cup 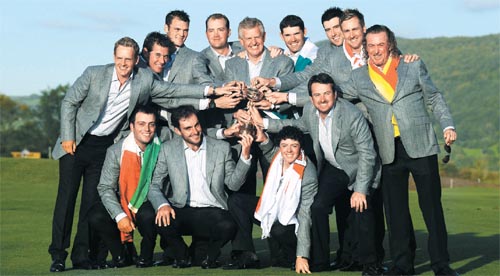 European team members pose with the Ryder Cup after defeating the U.S. team to win the 2010 Ryder Cup at Celtic Manor in Newport, south Wales, on Monday. [REUTERS]


NEWPORT, Wales - Graeme McDowell capped off an unforgettable year for himself - and for Europe.

In a Ryder Cup that came down to the very last match Monday, McDowell rolled in a 15-foot birdie putt on the 16th hole, then closed out Hunter Mahan to give Europe the 14 1/2 points it needed to reclaim the precious gold trophy.

It was the first time since 1991 that the Ryder Cup was decided by the final singles match, a thriller made possible by the Americans getting big wins from their best players and a stunning comeback by 21-year-old rookie Rickie Fowler.

Leave it to McDowell, the U.S. Open champion, to deliver another career-defining moment.

Under far greater pressure than he faced at Pebble Beach, he turned back the American rally with a birdie putt that seemed to take forever to reach the hole until it tumbled into the cup and set off a ground-shaking roar at Celtic Manor.

“Graeme McDowell was put there for a good reason - he’s full of confidence and that showed,” European captain Colin Montgomerie said. “That birdie on 16 was just quite unbelievable. Quite unbelievable.”

So was the finish.

Europe, ahead by three points going into the final round, took the early lead in eight of the nine matches and appeared on its way to another rout on home soil. It all turned so quickly.

Tiger Woods holed out from the fairway for eagle during a seven-hole stretch that he played in 7-under par. Steve Stricker won the opening match and Phil Mickelson built a big lead to win late. Then came Fowler, the first PGA Tour rookie to play in the Ryder Cup, winning the last three holes with birdies - including putts of 15 feet on the 17th and 18th - to earn an improbable halve against Edoardo Molinari.

That gave the Americans 13 1/2 points, and they only needed a halve in the last match to retain the cup. Just as Fowler was being mobbed by his teammates, Mahan made a nervy birdie putt on the 15th to cut McDowell’s lead to 1 up.

“The U.S. Open felt like a back nine with my dad back at Portrush compared to that,” McDowell said. “I was really nervous there. Wow! It’s a different feeling. It’s just so much pressure.”

It sure didn’t look that way as he blasted a tee shot down the middle and hit his approach to 15 feet, leaving him a quick putt.

“The best putt I’ve hit in my life,” McDowell said.

After a week of rain that forced the first Monday finish in Ryder Cup history, more showers soon followed - only these came from bottles of Champagne sprayed in every direction.

“It’s been the best week of my life,” said Rory McIlroy, who holed a 5-foot par putt on the 18th hole to earn a half-point against Stewart Cink that turned out to be crucial.

Montgomerie is renowned for a career missing only a major. This felt like one, maybe even better.

Europe thrives on winning the Ryder Cup, yet this year went beyond the matches. McDowell won the U.S. Open, and Martin Kaymer of Germany won the PGA Championship, the first time two Europeans have won majors in the same year since 1999.

For U.S. captain Corey Pavin, it was a week where everything seemed to go wrong, from forgetting to introduce Cink at the opening ceremony to rain suits that malfunctioned to pairings that blew up on him.

That changed in a two-hour window that shifted momentum, and almost the Ryder Cup, to his side.

“We nearly got there today,” he said. “We started off a little slow. We came back hard. We almost got there. I’m very proud of their resolve, of their sportsmanship and their fine play. I can only say it’s been an honor and a privilege to call them teammates.”

His voice breaking, he walked over to each of them at the closing ceremony to shake hands.

The Europeans were inspired by a phone call earlier in the week from Seve Ballesteros, the catalyst for European dominance in the Ryder Cup. He is battling brain cancer and could not travel to Celtic Manor. They kept a poster of Ballesteros in the team room, then displayed it for the crowd at closing ceremonies.

McDowell got the loudest cheer when Montgomerie called out his 12 players one by one. They know him well in these parts. In his final tournament before winning the U.S. Open, McDowell won the Wales Open at Celtic Manor.

Mahan made a mess of the 17th, memorable because it was the last match. The bigger blow might have been Cink. He was 1 up on McIlroy and drove the par-4 15th green, only to three-putt for par and lose the hole.

Cink had a chance to go 1-up on the 17th when he missed a 5-foot birdie putt. McIlroy scratched out a critical half-point on the 18th when he hit into a bunker going for the green in two, left his first shot in the bunker, and made a 5-foot par putt.

Luke Donald, who along with Poulter won three matches this week, twice made 20-foot birdie putts when Jim Furyk was inside 4 feet to halve the holes and keep the lead.