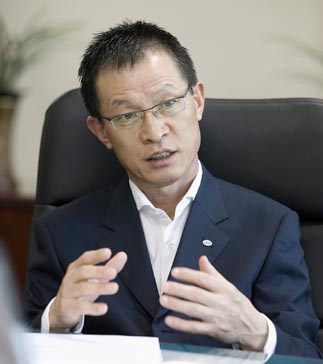 And surprisingly - or perhaps unsurprisingly - one of the most visible champions for Gangwon Province’s cultural and economic prosperity is Kangwon Land, Inc., known for operating the only casino in Korea that Korean citizens can enter and play in.

Kangwon Land was established as part of a government initiative to breathe life into the struggling towns that once depended on coal mining before the industry’s importance faded. Gangwon especially needed the development of new business sectors to attract capital to the region.

Kangwon Land also operates a hotel, ski resort, golf course and other leisure facilities under the banner of the “High1 Resort.”

The company has stood at the forefront of efforts to develop tourism and culture-related business in Gangwon.

Chief executive of Kangwon Land and Gangwon native Choi Young has devoted attention to trying to improve the region since becoming the head of the company in March 2009.

In an interview with the JoongAng Daily, he discussed how he is trying to conduct his business strategy so that it contributes to the improvement and prosperity of Gangwon.


Q. What do you as the chief executive of Kangwon Land, as well as personally, to support your local community?

A. Since Kangwon Land was first established, it has spent 10 percent of its profits, which now amounts to 758 billion won ($661.73 million), to revitalize the economy of the former coal-mining towns. The funds have been spent on various ventures to support local communities, including prioritizing the purchase of local produce used in meals we serve and hiring local construction companies for our building projects.

Besides supporting local communities in these ways, we have actively expanded hiring of local residents to provide for steady jobs and income. Of our 4,186 employees, 3,004 are residents of Gangwon Province.

In order to develop related sectors in the region such as security, housekeeping and maintenance, we outsource work to 23 local companies, thereby creating an economic effect of 54.9 billion won per year.

In addition, 57 billion won was provided to support more than 800 local lodging facilities and restaurants with our “High1 point system,” which gives points to Kangwon Land customers who can then use them to purchase services from local businesses. The Kangwon Land Foundation and other good work being done by Kangwon Land gives 17 billion won a year back to the community.

Personally, though it’s hard to find as much time as I like, I use my spare time to practice a life of sharing by volunteering in my local community with High1 Community Service.

Tell us about the movement to present one combined tourist package that includes both Kangwon Land and local communities in order to promote mutual growth. Is there a foreign example you have as a benchmark?

I’d like to think of Disneyland as an example. How has Disneyland remained one of the top resorts in the world, instantly recognizable by its name? The reason is simple. Facilities visited by children holding their parents’ hands are visited again by the same children once they grow up and become adults when they take their own children. We must create a resort that will be visited by generation after generation.

In order to make High1 Resort and the local region more memorable so that everyone who passes through wants to visit again, resources that are currently scattered must be united under a single large theme.

Beginning this year, we started working on a partial venture to market a tourist package that ties together Kangwon Land with the main tourist attractions in four local regions. As customer reaction has been very positive, the cooperation of local regions has also been astounding.

Resorts and other tourist attractions in Taebaek, Yeongwol, Samcheok and Jeongseon are tied together. As the first step to creating a tourism belt in the southern region of Gangwon Province and to maximize tourism for local communities, this has been a chance to get the word out about noted tourist attractions in the coal-mining region. And this is playing a considerable role in revitalizing the local economy.

How has concern for your local community informed your business decisions?

When I first took the helm of the corporation, I cut costs by eliminating unnecessary operations and chose an abandoned school building for our offices. My decisions originated from a particular business philosophy. A CEO must be principled as well as meticulous and clearheaded in distinguishing which investment will be profitable and which will not. As a CEO, it’s my job to bolster Kangwon Land’s performance. I hope it’s strong ties to these coal-mining towns, I hope the future will be better for the local communities and Gangwon as a whole.

I deem continuous communication with my colleagues a necessary virtue in one that heads an organization, so I first begun sharing breakfast with employees in April. This has given me a chance to share candid conversations with more than 300 employees since then. I often explain business philosophies in detail and ask employees to frankly share their opinions and difficulties.

Suggestions and problems discussed by employees are recorded and reviewed for application in the appropriate departments.

At first, employees seemed uncomfortable having a meal with the CEO, but as we gathered over meals more often, word spread to other employees, raising interest. Since then, many have expressed positive reactions, including that the strictly hierarchal atmosphere has softened and the corporation’s vision is being shared by more people.

As for the local community, though we are currently cooperating well in a spirit of coexistence with mutual projects such as the tourist packages I mentioned earlier, more understanding and cooperation is needed when pursuing ventures that have an even greater impact on our future.