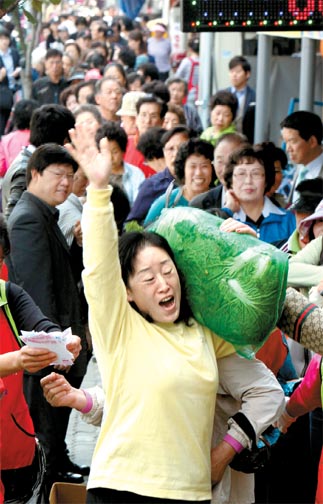 A woman waves in triumph after successfully buying cabbages at a discount at Shinwon market in Gwanak, Seoul. By Kim Do-hun

The record-high price of cabbage, the main ingredient in the most popular form of kimchi, has led to a new nickname for the staple side-dish: “geum-chi,” which uses the Korean word for gold, geum.

Now the opposition party is trying to turn cabbage into political gold by blaming the government for the nation’s kimchi crunch.

During the National Assembly’s annual audit, the opposition Democratic Party blamed the Lee Myung-bak government’s four-rivers restoration project for the cabbage shortage, saying 10,550 hectares of farmland adjacent to rivers disappeared during the project’s construction, and 8,181 hectares of fields once used as farms were no longer planted because they were inundated with dredged sediment.

“At least 5.9 percent of vegetable farms declined because of the four-rivers restoration project,” said Park Jie-won, floor leader of the DP.

“Only 3,660 hectares of farms are available near riversides where the four-rivers restoration project is under construction,” said Agriculture Minister Yoo Jeong-bok at the National Assembly’s audit on the Ministry for Food, Agriculture, Forestry and Fisheries on Monday. “It doesn’t make sense at all to link the price hike of vegetables to the four-rivers restoration project because farmers harvest cabbages on higher, hilly ground around this season.”

In a National Assembly audit meeting yesterday, Ko Heung-kil, the ruling party’s policy committee head, warned that the GNP will react strongly if the DP continued to make groundless arguments to sway the public’s sentiment.

Kim Moo-sung, floor leader of the GNP, said the DP was lying to the people about the price hike.

“Though the GNP argues the price hike has nothing to do with the four-rivers restoration project because only 1.4 percent of farming lands are diminished,” Sohn said, “it needs to keep in mind that a 10 percent drop in production can hike prices of farm products 50 to 60 percent.”

To ease prices, the government yesterday decided to temporarily eliminate tariffs on imported cabbage and radishes through the end of this year.

In a cabinet meeting presided over by new Prime Minister Kim Hwang-sik, officials decided to lower import duties on cabbages and radishes from China. The previous tariff for cabbage was 27 percent and for radishes 30 percent.

The government also cut tariffs on imported detergent, perfumes, cosmetics, vitamins and bath goods to between 4 and 6 percent from the current 8 percent until the end of the year.

“The measures aim to ease prices that have an impact on households,” an official at the Prime Minister’s Office said.

Meanwhile, 2,700 domestic cabbages that the Seoul Metropolitan Government offered at a discount at Shinwon market sold out in less than two hours after they were put on sale at 11 a.m. The government sold bags of three heads of cabbage for 14,000 won ($12.39). Cabbages were sold at 11,500 per head as of yesterday in other markets, according to the Korea Price Research Center.

“I lined up five hours before the sale began because I was concerned that I wouldn’t get cabbages,” said Shin Jeom-soon, a 64-year-old homemaker, who was the first to get a bag. “I’m relieved that I bought them at half price.”