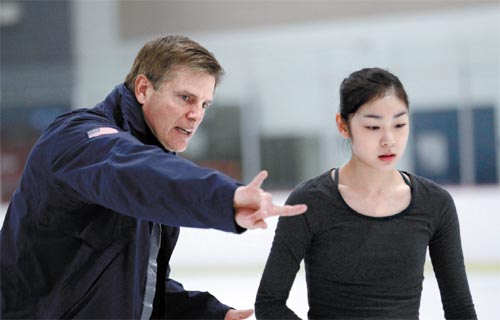 The 20-year-old Olympic gold medalist has been training in Los Angeles since she left Toronto in August.

Kim and her former coach, Canadian Brian Orser, had worked together in Toronto for the past three years before their acrimonious split.

Oppegard won bronze in the pairs event with Jill Watson at the 1988 Calgary Winter Olympics and coached Americans John Baldwin and Rena Inoue to the Four Continents Championship pairs skating title in 2006.

A brother-in-law of famed U.S. skater Michelle Kwan, Oppegard is currently teaching skaters at the East West Ice Palace in Los Angeles, where Kim had been training for last week’s ice show. The Kwan family operates the rink.

“I heard that my new coach trains athletes in a calm manner. I think he will help me a lot mentally,” said Kim through the agency. “I’m about to have a new beginning. I will prepare well for the new season with my new coach.

“I trained with Peter some 10 years ago when I visited the United States for intensive training. I remember him well.”

Kim added that she soon will discuss how they will work together for the upcoming season.

Oppegard said that he is looking forward to coaching the Olympic champion and that he was impressed with her performance and attitude on and off the ice.

Kim has said that she will skip the Grand Prix series competitions starting on Oct. 22 and concentrate on the world championship next year in Japan to snatch the crown back from reigning champ Mao Asada of Japan.

The South Korean was the bronze medal winner in 2008 and the runner-up this year.

Kim has not yet decided on her short program music.

But after their split, Orser revealed that the free-skate routine would be set to a compilation of Korean music, featuring the folk song “Arirang.”

Orser was quoted as saying it was “a fantastic program, by far the best one I’ve seen.”

But AT Sports, Kim’s agency, denounced Orser for breaching an unwritten code in figure skating by revealing a skater’s new routine in the middle of the off-season without the skater’s prior consent.