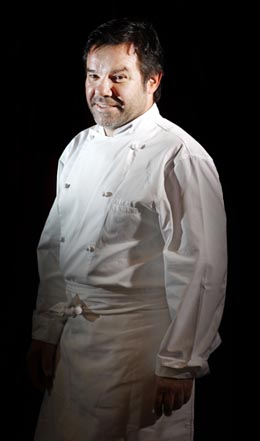 Chef Michel Troisgros was in Seoul to attend Seoul Gourmet 2010. By Kim Hyeon-dong

Through the steady hands of Michel Troisgros, carefully placed Belgian endive leaves were transformed into a scrumptious-looking flower in the blink of an eye. The owner of the legendary La Maison Troisgros in Roanne, France, was in Seoul last week to make a presentation at Seoul Gourmet 2010, a food festival that attracted world-renowned chefs.

Amidst “woos” and “ahs” from the audience of about 200 people, Troisgros overlapped one leaf onto another into a circle and placed tiny dollops of truffles on them. Afterwards, he sprinkled on a touch of salt.

“Voila! This flower bouquet is a gift for you all here,” he said, holding the pan filled with the endive appetizers. Each leaf was exquisitely folded and cooked, as if the European vegetables were always supposed to have looked this way. Next to him stood his son, Cesar Troisgros, 23, who works as a chef in California.

Throughout the decades, the Troisgros name has become globally synonymous with French fine dining. Perhaps one of the most recognized culinary families in Europe, the Troisgros have embodied French cooking with their distinctly simple, yet innovative style. Michel in particular, the second son of Pierre and Olympe Troisgros, is recognized for his unrestrained, personal, yet minimalist approach to traditional French dishes.

“My food is minimalist, with no flounces. I always want balance and precise flavors,” said Michel Troisgros.

Michel, 52, was deemed chef of the year in 2003 by Gault Millau Guide and was recognized by the French government with one of its most prestigious awards, the Legion d’Honneur. He now has restaurants in France, Japan and Moscow and is credited as being one of the pioneers of French nouvelle cuisine, a lighter, more delicate approach to dishes compared to French haute cuisine. 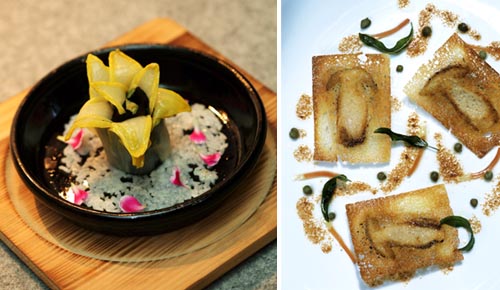 
The family’s restaurant La Maison Troisgros, which opened in 1930 under its former name Hotel-Restaurant des Platanes, has kept its Michelin three-star status since 1968 - the highest rating for a restaurant in France. In 1972, the Gault-Millau magazine credited the restaurant as being “the best French restaurant in the world.”

Despite its worldwide fame, the restaurant had humble beginnings. Michel’s grandparents, Jean-Baptiste Troisgros and his wife Marie, opened the restaurant and offered a no fuss but sincere regional cuisine in which Jean-Baptiste worked in the front of the house and managed the wine cellar while Marie worked inside the kitchen. During the 1950s, their two sons, Jean and Pierre, took over the business with Jean working as master saucier while Pierre was the head chef. In 1984, Michel, Pierre’s son, took over the hotel-restaurant with his wife, Marie-Pierre who is the manager and chief decorator.

For Michel, food, more than anything else, is a family affair. Before the JoongAng Daily’s one-on-one interview with him started, he insisted that his son sit next to him. His two sons, Cesar and Leo are both working in the culinary world while Marion, his daughter, is a horse-racing professor.

“Of course there was pressure and stress from growing up in such a household, but at the same time, it was a joy,” he said, adding that his whole life evolved around food from an early age. His childhood room in Roanne was right above the restaurant’s kitchen - the family lived and worked all under the same roof.

He recalled fondly of weekend brunches he had as a child with his parents and grandparents, enjoying his Italian grandmother’s gnocchi in the family garden and joked of how his father would always say that if you marry an Italian woman, you are marrying the whole family.

“I have a life-long principle - to change nothing, you have to change everything,” Michel Troisgros said. “I tried to take in what my parents gave me but at the same time, I knew that I had to change constantly, develop my own technique and write my own story through food.”

Looking at Cesar, the chef emphasized that the Troisgros family is a team.

“Someday though, a time for competition among family members might come,” Michel said, locking eyes with Cesar. “At some point, I needed an opportunity to surpass my father as well.”

Perhaps one of the most esteemed aspects of Michel’s cooking is that although his dishes are thoroughly French, they are extremely diverse in inspiration, technique and ingredients. His vision of modern French cuisine is cosmopolitan without falling into the rather tired concept of fusion food. With this, the chef managed to transform La Maison Troisgros’ dishes from the middle-class friendly, regional selections of his grandparent’s generation to a more open, international approach.

Michel said this is a result of almost 10 years of travelling together with his wife all around the world during the 1970s, in search of new ingredients and cooking styles.

“France, Switzerland, Belgium, England, U.S., South America and Japan ... It was the best time of our lives,” the chef said, a wide smile spreading across his face in remembrance. “My best experience was in California in 1977 because I met so many people from different countries. California is a melting pot of people from Asia, the Americas and Europe. So after meeting these people, I was at the beginning of what they call the California style, which was a mixture of Italian, Asian and French, in which the roots of that style was getting created by Alice Waters.”

Upon coming to Korea for the Seoul Gourmet 2010 festival, Michel said that he had little chance to encounter Korean food in France. He did however, have a word of advice about the perspective of globalizing Korean cuisine.

“In this respect, it wouldn’t be a good idea to insist on popularizing dishes like kimchi and other fermented food first. I think Korean barbecue has a lot of potential. It is accessible but special and not at all like American barbeque.”