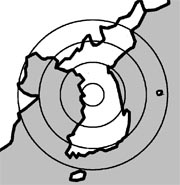 The United States failed to find weapons of mass destruction in Iraq, but the effectiveness of America’s high-tech weapons in wartime was verified.

One example is the Joint Direct Attack Munitions guidance kit. By attaching Global Positioning Systems to unguided bombs, these bombs turn into all-weather “smart” munitions that can strike long-range targets accurately. The Iraqi army was at its wits end, because it could not judge where attacks were coming from.

Another example is the Wind Corrected Munitions Dispenser. This system uses cluster bombs that eject 10 smaller submunitions, with each of them releasing four small bombs equipped with infrared sensors. In Iraq, the cluster bombs were dropped from an altitude of 30,000 feet so that many of the small bombs could detect and destroy Iraqi tanks and armored vehicles.

However, the weapon that has attracted the most attention is the E-bomb. It destroys electronic equipment with an electromagnetic radiation pulse (EMP). It does not aim to kill or wound humans or destroy enemy forces. It is a concept bomb that aims to disrupt communication systems and the enemy’s chain of command. An EMP can infiltrate wherever there is a conductor, such as an antenna, ventilator or water pipe.

The EMP concept was introduced in “The Matrix” series of films as the most powerful weapon available. Directed by Larry and Andy Wachowski in 1999, The Matrix takes place in 2199, when computers with artificial intelligence dominate humankind. What the so-called Brains in Vats recognize as reality is actually a sort of cyber universe in which these humans think and feel a fake reality. Through electric signals, people feel as if they actually contact each other and experience reality.

Here, Morpheus, a mysterious underground hacker who has real sensory organs and exists outside cyberspace, appears in his hovercraft to rescue Neo, the protagonist, who is trying to make sense of the connection between this cyberworld and the real world. Later, Neo is trapped by “Sentinel” machines, which track down and destroy humans who are launching attacks against them. At a critical moment, Morpheus uses an EMP weapon and the Sentinels are destroyed. The Wachowskis knew that the most powerful weapon developed so far is the EMP.

It has been reported that North Korea used “GPS jammers” that disturbed GPS signals on the West Coast in August. The device disturbs GPS reception and makes information on location and time black out. It can create critical problems for the operation of fighters, battleships and missiles. Moreover, it is the key technology of EMP-related weapons.

I wonder whether we now have to confront the danger of electronic warfare with the North in addition to nuclear threats. The North seems to be addicted to developing weapons even if its residents starve to death.