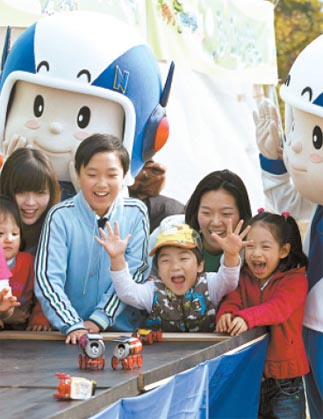 The nuclear festival will feature programs distribution. and hands-on activities to provide a greater understanding of nuclear energy.

A nuclear festival will be held this Friday and Saturday near the fountain square in Gwacheon Seoul Grand Park.

The Ministry of Knowledge Economy arranged the event, while the Korea Nuclear Energy Foundation is set to organize the festival. Overall interest in nuclear technology has increased in Korea ever since the country inked a deal late last year to build a nuclear power plant in the United Arab Emirates. Local officials say the agreement could open the door to additional contracts in other areas of the world, helping make Korea a leader in the export of nuclear power technology.

This year’s festival will aim to educate visitors on nuclear energy in a fun and interesting way as well as promote the environmental aspects of this power source. The event will feature various programs and hands-on activities aimed at giving families a greater understanding of nuclear technology. Visitors, for example, will be able to generate electricity by pedalling stationary bikes. A walking/trivia contest will be held twice on each day of the festival, allowing participants to stroll around Gwacheon Seoul Grand Park while answering questions tied to nuclear energy. Organizers also plan to offer a drawing contest.

The country’s efforts to export nuclear technology will serve as a centerpiece of the festival, and several events will highlight Korea’s accomplishments in this area. The recent contract with the UAE is valued at roughly $20 billion, a massive amount of money that is equal to the export of some 1 million automobiles. Additionally, the festival will have a Nuclear Energy Export Hall where visitors can learn about Korea’s achievements in developing nuclear technology abroad.

Another exhibit at the event will trace the 50-year history of Korea’s nuclear industry through photos. The festival will feature musicals aimed at children and a concert Friday evening by famous groups such as BOA.

“At a time when Korea’s nuclear energy technology is getting some well-deserved recognition across the world, we will host this festival to raise even more interest in our nuclear technology,” said Korea Nuclear Energy Foundation Chairman Rhee Jae-hwan. “This is a great time of year to be outside and enjoy nature, so we expect to see a lot of families at the festival spending time outdoors and learning about environmentally friendly energy.”

The Korea Nuclear Energy Foundation was established in 1992 and ranks as one of the only promotional organizations for nuclear energy in the world. Its chief goal is to raise interest in the peaceful use of nuclear technology. It spearheads and promotes a variety of activities and events, including visits to nuclear plants, educational efforts, research and development and information distribution.