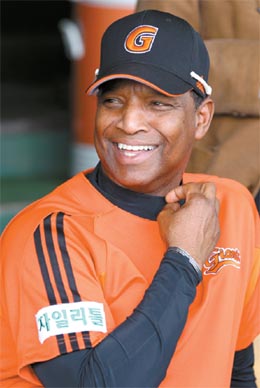 With his future as manager of the Lotte Giants still up in the air, Jerry Royster returned to the United States yesterday afternoon.

Royster’s Giants were eliminated from postseason play with three consecutive losses against the Doosan Bears in the first round of the best-of-five playoff series. It was Lotte’s third consecutive first-round exit from the postseason.

Lotte officials have been reluctant to sign the American manager - who holds the distinction of being the first and only foreigner to have managed in the KBO - to a long-term deal, giving him just a one-year contract last year. They wanted Royster to lead the Giants out of the first round this year before committing to another contract.

“If the front office offers a contract extension, I will remain in Korea for another three to four days but if that’s not the case, I will leave soon,” Royster said at a press conference on Tuesday.

Royster said repeatedly since the middle of the season that he wanted to return to the Lotte Giants. Despite coming up short in three playoff appearances, Royster turned around a club that was coming off an eight-year postseason drought.

Having inherited a seventh-place Lotte team coming off a 55-68-3 record in 2007, Royster led the Giants to a 69-57 record in 2008 but they were swept by the fourth-seed Samsung Lions in the first round.

Last season, Lotte finished fourth and won the opening game of the first-round playoff series before losing three consecutive games to Doosan. This year, the Giants finished fourth overall but had the most potent and entertaining offense in the league.

Lotte officials have yet to make a firm decision on the matter and are being cautious in their approach. It is expected that the Giants’ front office will take considerable time before making a decision.

“We will start with an evaluation, and a report will be completed next week,” said Giants general manager Bae Jae-hoo.

Once the report is completed, it will pass through Jang Byung-soo, the club president, before being submitted to the sponsor. There are several more steps before a final decision can be reached. Last year, it took the Giants until Oct. 29 to announce they would bring back Royster for another season.

One of the reasons Royster wanted to ink a deal with the Giants as quickly as possible is because he wanted to prepare for next season by attending the team’s offseason training camp, which starts Oct. 20 in Australia. The longer the evaluation process takes, the more it can have an effect on the Giants’ offseason preparation.

“The Giants suffered a lot of injuries this season and it was not easy for them to make it to the postseason,” said one veteran coach in the KBO. “It takes time to build a strong team.”

At the end of game five of the first-round series on Tuesday, Royster addressed his team: “If I fail to re-sign with the club, today will have been my last game with the team. I am proud of you guys.”