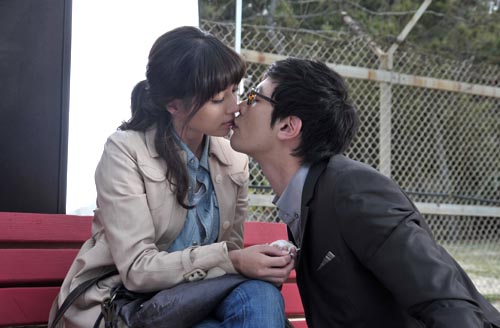 A scene from “Cyrano Agency.” Provided by the agency


People often say that love is a game. And in the recently released romantic comedy “CyranoAgency,” five new players give the game their best shot as they try to cloak the truth in the attempt to win over their “targets.”

Byeong-hoon, played by Uhm Tae-woong, operates a dating agency called Cyrano that offers to play cupid to its clients - helping them win over their romantic crushes, without anyone finding out about the arrangement. One day, Sang-yong, a fund manager played by Choi Daniel, walks in with a request to win over Hee-joong, his crush, who turns out to be Byeong-hoon’s former love.

As the movie title appropriately suggests, it is a modern take on the 1897 French play “Cyrano de Bergerac” about a French cadet of the same name, who because of his unflatteringly large nose, expresses his love for his distant cousin, Roxane, through love letters via one of his cadets, Christian. Roxane believes the letters were written by Christian, who is also in love with Roxane.

The movie waltzes around the idea that if played well, love can indeed be won. As Sang-yong recites “perfect” monologues - written ahead of time by Byeong-hoon - during his romantic situations with Hee-joong, she starts to fall for him.

During this process, the movie plays well with the metaphor of young lovers ultimately becoming actors for each other, especially when young without a clear sense of self identity. It’s true that we often play a role for each other, whether you are temperamental with one person, or spontaneous and wild with another. Different personalities are portrayed depending on who we meet, or at the very least, different parts of us are accentuated during varying relationships - all points the film catches onto in a sweet, yet mature portrayal of young love.

As in any memorable relationship, the film wisely acknowledges that it is not the facts but the nuanced details that are most important in the process of falling in love. In each of the flashback scenes between Byeong-hoon and Hee-joong, the audience gets a sharp sense of the couple’s own language, whether they talk about their song, a lighter or clam soup.

Amid the flood of carelessly made romance movies of late, “Cyrano Agency” is a breath of fresh air. There is no bad guy or gal who is trying to create misunderstanding between the lovers.

Because Byeong-hoon and Sang-yong are both well developed, the audience ends up feeling empathy toward both.

In the end, director Kim Hyeon-seok’s sharp, intelligent direction leads us to root for whoever wins over Hee-joong, but nonetheless sympathize with the one who doesn’t.