When art transcends vanity, it’s all in the ad

When art transcends vanity, it’s all in the ad 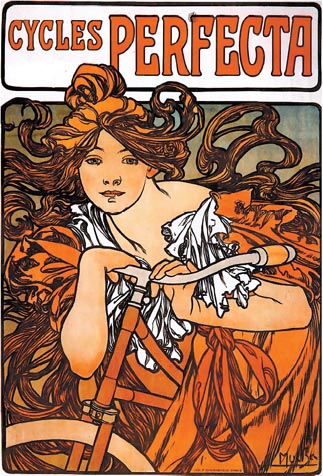 A symbol of the modern woman, the bicycle was praised by feminists at the time, calling it a “freedom machine” for women. Meanwhile, a conservative American preacher was said to have criticized women who rode bikes, comparing them to witches riding brooms.

In a late 19th century ad by Czech-born artist Alphonse Mucha (1860-1939) for a bicycle maker, a beautiful woman stands leaning on the handlebars of a bike. Her windswept golden hair forms elegant lines unique to the Art Nouveau style. Through her ruffled hair and fluttering dress, viewers of the poster synthetically feel the wind.

The image lured female consumers to ride bicycles to enjoy the same sense of freedom as the woman in the ad - indeed, to become a modern woman.

And the ad could not have appealed only to women. The image of a woman on a bicycle - cutting-edge at the time - can be compared to that of a woman riding in a sleek sports car today. So the ad must have attracted men’s desires, too.

In the 1890s, when the poster by Mucha came out, the popularity of bicycles had reached a peak. 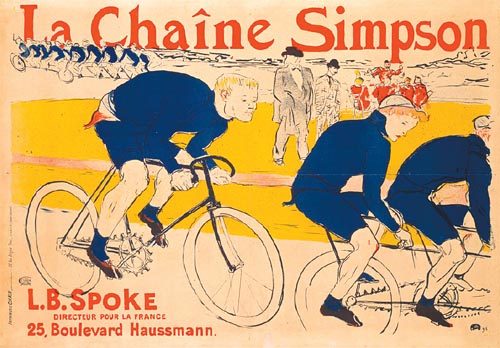 
Henri de Toulouse-Lautrec (1864-1901), another master of ad posters during this period, loved to watch bike races, though he could not ride a bike himself because of a physical disability. While his posters were usually targeted at dance hall attendees such as at the Moulin Rouge and circuses, he designed a poster to advertise a bicycle-chain maker. Perhaps his love for bicycles compelled him to accept the commission for the poster.

The posters did not escape criticism from social conservatives either. Mucha’s stylish poster - which indirectly promoted bike-riding - in particular was a prime target.

His ad gives no information about the bike’s function or performance. Instead, it triggers the implied vanity of consumers by suggesting that if they buy a bicycle, they will be received by other people as cool and modern women.

In the words of French sociologist Jean Baudrillard, this ad does not tell us the “use value” of the bike but tells us its “sign value.”

Such buying habits span the centuries, as this ad proves.

Consumers make purchasing decisions not only for perceived necessity, but also because of social perception. Many consumers - whether in the late 19th century or the 21st century - feel pressured to follow prevailing trends in consumption. 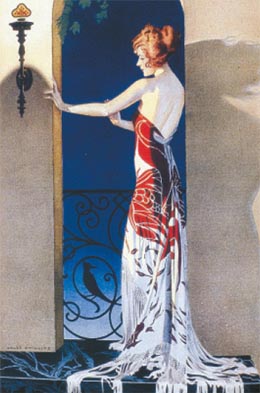 These consumers are eager to show off their ability or social status through the purchases they make. Thorstein Veblen (1857-1929), an American economist, called this “conspicuous consumption.”

Such consumption patterns are a loophole in neoclassical economics, which is the basis for mainstream economics today. For most goods and services, if their prices climb, demand for them declines.

However, for certain luxury goods and services, when prices rise, demand stays the same or increases. These products are called “Veblen goods.”

Advertisements are agitators for conspicuous consumption, according to Veblen and another American economist, John K. Galbraith (1908-2006), who was heavily influenced by Veblen.

Veblen criticized businessmen of his time for using their money and brainpower to create ads to appeal to consumers’ vanity, rather than to improve product quality.

Galbraith, who saw more splendid ads in the 20th century, took it a step further and argued that consumer ads should be abolished. Humans, according to Galbraith, have absolute “needs” and relative “wants.” And ads generate wants for products in consumers’ minds that had not existed until seeing the ads - leading to unnecessary purchases. He called it the “dependence effect.”

There is some truth in such critical opinions about advertising, but they are not bulletproof.

Austrian-born economist Friedrich von Hayek (1899-1992) rebutted Galbraith’s views in many ways. In particular, he pointed out that culture and art were never generated by absolute necessity.

In fact, sculptures by the Italian Renaissance master Michelangelo were not made due to any basic human need. Then, would Galbraith can say that these, too, should be abolished?

Even if advertisements generate desire, how many people would decide to consume only because of an advertisement? And how many companies would survive if they focused only on advertising, while neglecting efforts to improve product quality? There are few consumers who purchase relatively expensive durable goods only because the ads for them are cool.

On the other hand, people are more willing to take a risk on a product that is priced relatively cheaply when prompted by clever marketing. Still, even the cleverest ads cannot hide a bad product. As such, advertisements do not dictate consumption; they only trigger consumers’ attention, which is a first step in consumption.

Moreover, the ad posters of Mucha and Toulouse-Lautrec had artistic value and played a role in public art when they were put up on street walls in the late 19th century.

There are also ad campaigns that give consumers aesthetic pleasure and fun in our days. Yet corporations are often criticized today for spending piles of money to advertise their products. Such criticisms are based on concern that advertising costs could be passed on to consumers. Increased corporate costs, they say, lead to higher prices.

But even if companies pour money into their advertising departments, thus raising costs and prices in the short term, today’s mainstream economists say prices would fall to a reasonable equilibrium in the long run. Competitors that offer lower prices would emerge, eventually curbing price increases.

But other economists argue that the “long term” could be really long, while consumers suffer from short-term price increases.

As long as consumers make purchasing decisions that are not based purely on logic, rationality and necessity - ad campaigns will be around to target the more intrinsic, irrational aspects of human nature when it comes to buying habits.