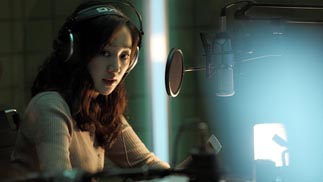 The innocent and sexy actress from the 2008 hit “Sunny,” Su Ae is performing her first thriller in Midnight FM with Yoo Ji-Tae from “Old Boy” (2003). Since Su Ae has always taken the role of a fragile and sweet heroine in previous films, the transformation into a powerful and charismatic woman - who is ready to do anything to save her family - will surely catch the attention of moviegoers.

Sun-young (Su Ae) has been hosting a radio show at midnight for the past five years. However, she has to let it all go due to her daughter’s worsening health condition. Forced to let go of the job she loved, her last day wasn’t as perfect as she wanted it to be.

The day worsened when a mysterious listener, Dong-su (Yoo Ji-Tae), called Sun-Young during the last two hours of her show. The game begins.

Dong-su threatens Sun-young, telling her that her family won’t be safe unless she does as she is told. While broadcasting live on the radio, Sun-young has to follow the instructions of Dong-su to save her family. Her last two hours of live broadcasting turned into a nightmare. The desperate bloody struggle between Sun-young and Dong-su unfolds.

And that’s probably what makes 22 Bullets a pretty shocking film.

Jean Reno stars as a mob boss named Charly Mattei who is out for revenge after getting shot 22 times in the film’s opening sequence. He somehow survives the incident and believes one of his former friends was behind the attack. The film follows Mattei across several countries and locales as he kills just about anybody who gets in his way to find his former friend Tony Zakia (Kad Merad).

Reno is usually good at playing the emotionally hurt - or in this case physically hurt - assassin who’s relatable on many levels (see: “Leon”), and with a revenge story like this, it’s hard not to say no.

But the story isn’t new and some critics said the focus on revenge detracted from character development.

It’s “The Godfather” meets French stylistic filmmaking, so it has its pros and cons. 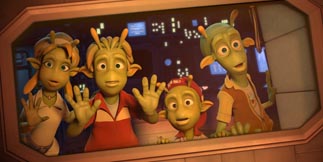 Dwayne Johnson, more commonly known as “The Rock,” has added yet another mediocre work to his filmography. He was, of course, a professional wrestler. But since then, he’s been busy playing scorpion kings (twice), a muscular tooth fairy and now an animated American astronaut named Chuck Baker who lands on a faraway planet.

To Chuck’s surprise, the planet is inhabited by aliens, but they inexplicably speak English and live just like human beings stuck in some sort of mid-20th century Norman Rockwell time warp. The aliens view Chuck as a harbinger of an imminent invasion by humans of their home, Planet 51. Frightened, the aliens pursue and capture Chuck.

But along comes Lem, a teenage alien, who crosses paths with the human and discovers that Chuck isn’t the brain-eating zombie monster alien society believes. Lem, voiced by Justin Long, helps Chuck return to his spaceship so that he can return home.

Created in Spain, and written by one of the screenwriters for Shrek, Planet 51 has been widely panned for its unoriginal plot yet still holds a few laughs for most.

Dazzling martial arts, a fantasy like setting and a romantic storyline is illustrated beautifully in “Reign of Assassins”, directed by Su Chao-Pin and genre master John Woo.

Before the main story of the film begins, the opening fight sequence is important, which is set in an ancient monastery before a giant statue of Buddha where the earthly remains of a mystical Indian monk that has magical properties is located. The Dark Stone gang wants them. Their most invincible and ruthless assassin, Drizzle (Kelly Lin), obtains the remains of the monk. However, she kills the man that she loves, monk Wisdom, which leads her to leave the gang.

Drizzle changes her identity and receives surgery to appear older due to her desires to leave the gang. She transforms to Zeng Jing (Michelle Yeoh). She begins her quest to return the remains of the monks, which the gang is still looking for, to its rightful resting place.

The Wheel King and the gang also recognize that Drizzle is back and the story and action begins.