Fold it, wear it - just don’t toss it

Fold it, wear it - just don’t toss it

You doodle on it, fold it, wrap it and play tic-tac-toe on it - some people even fold it into airplanes. But when brought to life, paper - more precisely, what it becomes - is a growing industry all on its own. With the expert touch of designers, paper is transformed into chairs, bookshelves, toys and even clothes.

One factor leading the trend is environmentalism, as consumers move away from plastic products, especially shopping bags, to recycled paper and more creatively engineered furniture and apparel. 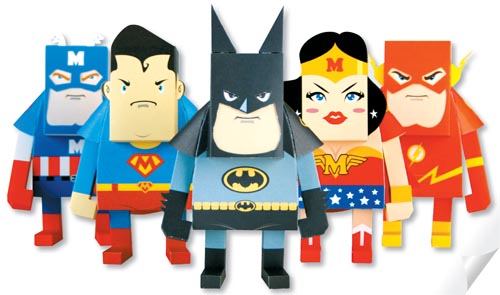 If you find Bearbrick or Sony Angel irresistible, Momot is for you. Momot means “nemo nemo robot” (nemo is the word for square in Korean) and this brand offers hundreds of paper toys with different faces and outfits. From monsters to dog-faced humans, celebrities and superheroes, Momot Design Studio creates all these 5-inch tall-and-zany toys all out of paper.

“[People] say they can’t believe these toys come from just paper because paper is two-dimensional, but these toys are three-dimensional. That’s their first reaction,” said Lee Joon-kang, a Momot designer.

Lee is a leader in the paper-toy trend and first came up with the idea to make toys out of paper for his industrial design graduation project at Hoseo University in Asan.

Taking a closer look at these paper toys, the details are as delicate as the folds are precise. One Momot named Street People is actually a series of figures that have ear piercings and wear bulky watches, Adidas Superstar gear and black caps. All his accessories are detachable.

“Feedback from all these people was great after the graduation project. Right after that, we received business proposals from a couple of companies,” Lee said.

That was the beginning of Momot Design Studio. Clients now include Nike Korea and hip clothing brands such as DOHC and Feltics.

Of the many paper varieties, the design house said it uses ordinary vellum paper.

“If we use some other paper that has a glossy texture, Momot doesn’t look like paper toys - but plastic toys,” Lee said. “In order to let the rough and natural feeling of paper survive, we insist on using ordinary paper.”

Among its other products, crafted paper bags and boxes are becoming especially popular thanks to the government ban on plastic bags. By cutting out Momot patterns by hand, a simple box is turned into a Momot product.

The design studio operates an online shopping mall at www.momotstore.com. A single Momot can be as cheap as 3,000 won ($2.70). 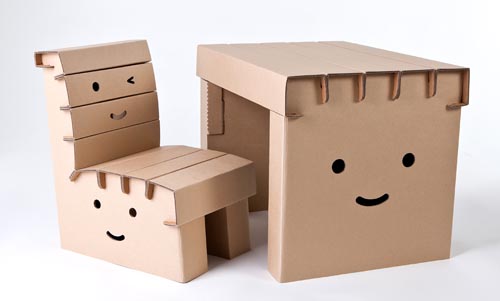 Kang Jae-won and Yu Su-young both made props and sets after graduating from college. After creating many different props, with anything imaginable, they found that paper had limitless potential as a raw material. Layers of paper are sturdy enough to handle a human being’s weight - but still light enough to be lifted with a finger.

In 2007, Kang and Yu launched Ynnos, a company specializing in paper furniture for children. Their brand is Funny Paper.

After years of research and development, Ynnos has begun offering chairs, stools, tables, bookshelves and toy houses made with cardboard.

“In the early days, people thought paper furniture was something unique - but an increasing number of people now see it as a green product,” said Oh Dan-bee, a Ynnos public-relations officer.

In case there was any doubt, the state-run Korea Environment and Merchandise Testing Institute put the products under the microscope, so to speak. It found that the furniture is strong enough to hold up to 300 kilograms (661 pounds).

“The biggest advantage is it contains no toxic chemicals, ” said Oh, adding that the furniture is very mobile and safe for children.

Ynnos’ main clients are parents of young children, but the company is in the process of producing paper furniture for adults. Prices start at 16,500 won for a chair. Go to www.funnypaper.co.kr for more information.

There are even companies producing and marketing clothes made from paper.

Lokta paper - popularly known as rice paper - can be transformed into washable and durable clothes. Fair Trade Korea Gru started selling paper clothes in July 2008. According to the company, Nepal-made Lokta paper is lighter and softer than ordinary paper.

Two types of paper jackets, one with three-quarter sleeves and the other with short sleeves, are available at online and offline Fair Trade Korea Gru shops. The paper clothes look like a mixture of cotton and hemp.

And Korean designer Lee Kyoung-jae even makes made-to-order wedding dresses with paper, in this case, hanji, or Korean traditional paper.

“If the clothes are 100 percent hanji, you can wash it with water, but if hanji is combined with other materials such as silk, you should dry clean,” Lee said. 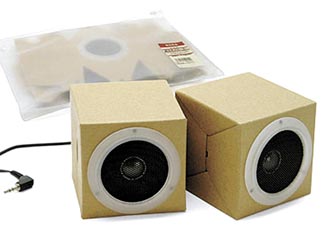 In the United States, Green Box (www.greenboxny.com) is replacing ordinary pizza boxes with more eco-friendly ones.

Produced by ECOvention, LLC, the bottom of the box turns into plates and containers for leftover pizza.

William Walsh, the founder and CEO of ECOvention, was inspired by his college days when he lived with 30 football players in the same house.

Said ECOvention CFO Jennifer Wright: “Plates were a scarcity as they were usually sitting dirty in the sink. Right then, Will had his first ‘aha’ moment and the Green Box design began to develop.”