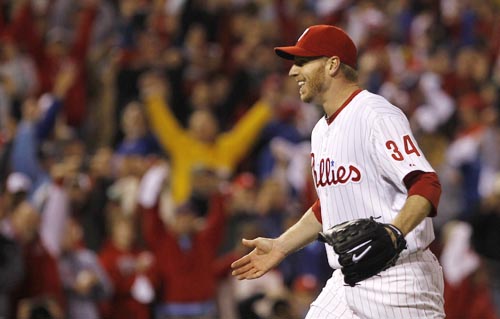 Philadelphia Phillies’ Roy Halladay throws a no-hitter against the Cincinnati Reds in the first game of the National League division series yesterday. The Phillies won 4-0. [AP/YONHAP]


PHILADELPHIA - Roy Halladay threw only the second no-hitter in postseason history, leading the Philadelphia Phillies over the Cincinnati Reds 4-0 in game one of the National League division series on Wednesday.

Halladay, who threw a perfect game at Florida on May 29, dominated the Reds with a sharp fastball and a devastating slow curve in his postseason debut.

The All-Star right-hander allowed one runner, walking Jay Bruce with two outs in the fifth, and struck out eight.

This was the first time anyone had pitched a no-hitter in the postseason since 1956, when Don Larsen threw a perfect game for the New York Yankees in the 1956 World Series against the Brooklyn Dodgers - the only perfect game in MLB postseason history.

“It’s surreal, it really is,’’ Halladay said. “I just wanted to pitch here, to pitch in the postseason. To go out and have a game like that, it’s a dream come true.’’

Halladay took the “Year of the Pitcher” into the postseason by dominating the Reds in his first playoff start.

Halladay spent 12 seasons with Toronto, far from the postseason. A trade last offseason brought him to the defending two-time NL champions.

With a sellout crowd standing in the ninth and chanting “Let’s Go, Doc!’’ Halladay got a loud ovation when he jogged to the mound to start the inning.

Ramon Hernandez popped out to second baseman Chase Utley for the first out. Pinch-hitter Miguel Cairo then fouled out to third baseman Wilson Valdez.

Halladay then made history when he retired Brandon Phillips on a tapper in front of the plate to end the game. Catcher Carlos Ruiz pounced on the ball and threw Phillips out.

Halladay pumped his fist into his glove as Ruiz rushed to the mound. Just like catcher Yogi Berra did with Larsen, Ruiz started to jump into Halladay’s arms. Unlike Berra, Ruiz didn’t wrap up his pitcher in a bear hug.

“I felt like we got in a groove early,’’ Halladay said. “Carlos has been great all year, he helps me get into a rhythm early, throwing strikes.’’

Phillies pitchers Roy Oswalt and Cole Hamels ran out of the dugout side-by-side to congratulate the other member of Philadelphia’s “Big 3.”

Pretty soon, everyone in a Phillies uniform was part of the victory party.

Phillies shortstop Jimmy Rollins made the toughest play to preserve the no-hitter, going deep in the hole and making a strong throw to retire Joey Votto in the fourth.

Pitcher Travis Wood hit a sinking liner to right that Jayson Werth caught in the third.

And pinch-hitter Juan Francisco hit a hard grounder up the middle in the sixth, but Rollins scooted over and made it look easy.

The last time a pitcher came close to a no-hitter in the postseason was quite a while ago.

Boston’s Jim Lonborg went 7 2/3 innings against St. Louis in the 1967 World Series before Julian Javier broke up the bid with a double.

The Phillies now lead the series against Cincinnati 1-0, but need two more wins to move on the NLCS. The Phillies led the majors in wins (97) for the first time in franchise history and are trying to become the first NL team in 66 years to win three-straight pennants.