Call for more sons of generals past

Call for more sons of generals past 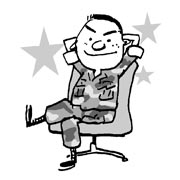 During the Korean War, the Korean Peninsula was also the place where American military generals and their sons practiced noblesse oblige.

A total of 142 sons of American generals participated in the war and 35 of them were killed in action or wounded. One of them was James Van Fleet, Jr., a captain of the U.S. Air Force and the son of the U.S. 8th Army Commander James Van Fleet. James, who participated in the war together with his father, went missing in action while on a bombing mission during night hours.

“I received combat flying training voluntarily. I will fly a B-26 bomber. To defend the right that everybody in the world deserves to live without fear, my father fights in Korea. It seems that the day I can be a help to my father is approaching,” wrote James in his last letter to his mother. General Van Fleet maintained the posture of a real soldier even after his son went missing in action. Believing it was reckless, he stopped the rescue operation of his son from enemy territory, and he fulfilled his duty as the commander of the U.S. Army without a hitch.

Sam Walker, the son of Walton Walker, who was commander of the 8th Army before Van Fleet, participated in the Korean War as an army captain. After Walker Sr. met a tragic end near Uijeongbu in December 1950, Douglas McArthur, commander of the U.N. Forces, summoned Sam to his office in Tokyo and ordered him to go back to the United States with the remains of his father. But Sam insisted on going back to the front line because he could not leave the men under his command who were struggling hard risking their lives.

In Korea, too, there was a similar tradition. One example was the sacrifices that the sons of Silla generals made at a battle between the Silla Kingdom and Baekje Kingdom at Hwangsanbeol in 660. When Silla troops were driven into a corner by the Baekje army, the generals sent their beloved sons into a deadly situation. What the two generals asked of their sons was to show patriotism, filial piety and be a model for the soldiers.

Today, at the Defense Committee’s inspection of the administration, a controversy was raised over the issue that the sons of military generals were assigned to relatively easy posts. While only a small number of them were assigned to heavy-duty combat troops, more of them were dispatched to overseas countries on peace-keeping missions. In the aftermath of the uproar against the scandal that the daughters of cabinet ministers were given jobs at the Foreign Ministry without passing a state exam, it may not be a surprise any longer. But the government should not take it lightly. I wonder if we can expect to see sons of generals who are comparable to the sons of American generals who shed their blood to defend this country as well as the sons who inspired Silla troops.