Sohn maps out his route to take presidency for DP

Sohn maps out his route to take presidency for DP 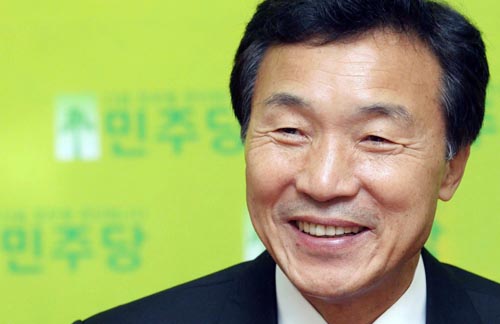 Sohn Hak-kyu, chairman of the Democratic Party, during an interview with the JoongAng Ilbo yesterday. By Kim Hyung-soo


Defining his victory in the recent Democratic Party leadership election as the opposition’s strong will to capture the presidency, Sohn Hak-kyu said yesterday that it’s time for the liberals to become competent in forging a prosperous society.

In his first interview after winning the chairmanship of the largest opposition party, Sohn explained to the JoongAng Ilbo yesterday his views on a wide range of topics from politics to North Korea.

“The liberals should no longer deny growth,” said Sohn, 63. “To win the presidency, we must give confidence to the people that they can make a living [under our leadership]. If the liberals do not have the ability to facilitate growth, they become useless. We must become able, competent liberals.”

Sohn said for the Democrats to win the next presidential election, they must not be obsessed with short-sighted political fights.

“The ultimate goal at all times must be a presidential victory,” he said. “When we repeatedly remind ourselves that the people are the priority, good policies will be made. An opposition party must fight when it has to and present alternatives when it has to. That’s different from populism.”

Sohn defined his philosophy for the party as “a society where everyone prospers together,” and said the DP should “attempt to reconcile globalization and the polarization of the 2000s.” He said the philosophy is crucial to creating a party that can succeed in getting its candidate elected president.

“The desire for globalization based on neoliberalism created President Lee Myung-bak,” he said. “But the worsening polarization of the society quickly united the victims and weakened the Lee administration.”

Sohn, a former three-term lawmaker, served as Gyeonggi governor from 2002 to 2006 under the Grand National Party. He left the ruling party in 2007 after he dropped out of the presidential primary against President Lee and former GNP Chairwoman Park Geun-hye. Months later, he joined the Democratic Party and competed in a primary to become its presidential candidate, but lost to Chung Dong-young.

“When I was a Grand National, I always said the party must not deny liberalism,” he said. “If the GNP wants to survive, it must incorporate liberal values into its philosophy. That’s why I always argued for reform.”