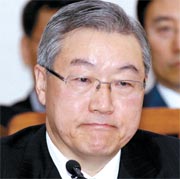 Foreign Minister-designate Kim Sung-hwan was grilled at a confirmation hearing yesterday about both his abilities and his ethics, including a draft-dodging allegation and questionable real estate and stock investments.

Opposition lawmakers on the Foreign Affairs, Trade and Unification Committee fiercely attacked Kim for being ethically unfit, while the ruling Grand Nationals defended him. Confirmation hearings for ministerial posts are mandatory, but the National Assembly cannot block a nominee from taking the post.

Kim, who submitted a medical document to the lawmakers, said, “If necessary, I will show you my teeth.” But the Grand Nationals on the committee opposed it, saying that lawmakers have no professional expertise to appraise Kim’s medical condition.

Opposition lawmakers also accused Kim of evading taxes when he purchased a property in August 2004 and sold an apartment a month later. “You deliberately evaded taxes by drawing up contracts with false prices,” said DP Representative Park Joo-sun. “That deserves criminal punishment.”

Kim said his tax accountant signed the inaccurate contracts and pledged to pay any taxes due.

Lawmakers also grilled Kim about a stock investment he had made in 2003. At the time, Kim was Korea’s ambassador to Uzbekistan. Kim purchased 5 million won ($4,481) worth of a Kosdaq company’s shares. Afterward, the share’s price went up 13.7 times until he sold out in 2006.

Lawmakers asked if he had used insider information in his decision to invest, but Kim said he was simply lucky.

In a written report to the lawmakers, submitted before the hearing, Kim detailed his North Korea policy and intention to reform the Ministry of Foreign Affairs and Trade.

“South Korea currently is not pushing for an inter-Korean summit,” Kim wrote. “If it helps peace on the Korean Peninsula, it is possible to think about sending a special envoy to the North.”

Kim also wrote that North Korea is moving toward a third-generation power succession, adding that there is no clear sign of an imminent collapse of the North’s ruling regime.

Meanwhile, Kim Tae-hyo, the president’s secretary for national strategy, and Kim Sook, the first deputy director of the National Intelligence Service, are being discussed as possible candidates to fill Kim Sung-hwan’s post at the Blue House, a senior government officials said.

Kim Tae-hyo, 43, is a North Korea scholar who has supported Lee since his presidential campaign. He is also the architect of Lee’s key North Korea policy: to provide economic assistance to the country to boost its per capital national income to $3,000 in return for Pyongyang’s denuclearization. He has served as Lee’s national strategy secretary since Lee’s inauguration.

Kim Sook, 58, is a veteran diplomat who held key posts at the Foreign Ministry since he passed the foreign service exam in 1978. He served as head of the North American bureau from 2004 to 2006 and chief negotiator for the six-party North Korean nuclear talks from 2008 to 2009 until he was appointed to the vice minister-level post at the National Intelligence Service.

The Blue House is expected to announce Kim Sung-hwan’s successor as soon as his confirmation hearing and appointment are concluded.