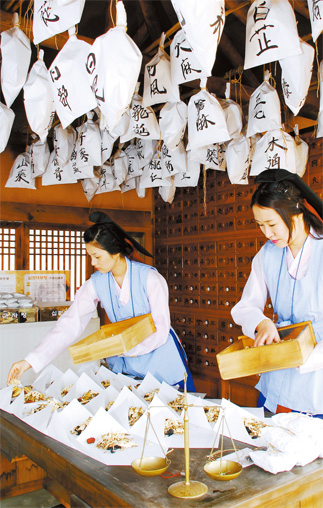 Women at the Traditional Oriental Medical Clinic prepare free giveaways for visitors to the 2010 World Oriental Medicine-Bio Expo in Jecheon, North Chungcheong. Provided by the organizers

Under the theme “Rediscovery of Traditional Oriental Medicine,” an exhibition of the past, current and future of traditional Korean medicine and much more are on display at the 2010 World Oriental Medicine-Bio Expo in Jecheon, North Chungcheong.

One does not need to search far for remedies to cure poor health. Items with medicinal values are all around us. This rings especially true in a city like Jecheon. Known as the hub of herbal medicine in Korea, 30 percent of all medicinal herbs produced in the country are from the area. Located in the Taebaek Mountains, its ideal climate and central location on the Korean Peninsula have made Jecheon a medicinal hub over the years.

“I didn’t really know much about traditional medicine before coming to the expo,” stated Cha In-cheol, 27, of Chungju, North Chungcheong. “I learned a lot and now realize a lot of herbs have medicinal value and can be used to treat illnesses. Herbs are not just used for medicinal use but apparently used a lot in food in this area. I’m looking forward to an acupuncture session later in the afternoon.”

The inaugural expo got underway on Sept. 16 and is being held until Oct. 16 at the Jecheon Bio Valley 2 complex. The response has been favorable, according to organizers. Having reached the 1 million visitor mark earlier this week, they expect to draw 200,000 more visitors.

Judging by the number of people milling around, the most popular exhibits are the Futuristic Korean Medicine Pavilion and the free treatments at the Traditional Oriental Medical Clinic.

With many experts on hand, visitors can sign up for check-ups and acupuncture treatments.

The benefits of using traditional medicine to treat or prevent ailments are clear. While it may not have the immediate impact of modern medicine, the natural remedies come with fewer potential side effects. 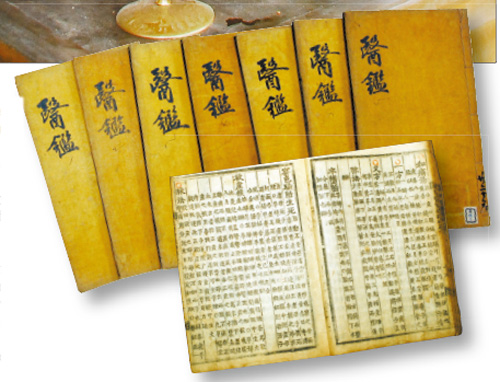 A replica of a Joseon-era hanbang clinic and Donguibogam. Provided by the organizers

“Traditional methods are natural and safer in many cases,” stated Yoon Dae-yeon, doctor of the College of Oriental Medicine of Semyung University, Oriental Rehabilitation Medicine department. “For example, those suffering from back pain are usually given cortisone or steroid shots. They’re effective in suppressing pain but also come with many side effects. Steroids, in particular, cannot be used over an extended period of time.

“In traditional medicine, we can offer acupuncture and shots containing extracts from bee stingers as an alternative. It does contain poisonous elements, but it can be controlled. We also try to discourage surgery as much as possible and look for natural methods to heal our patients,” the doctor added.

At the futuristic medicine pavilion, one can find out their constitutional type based on facial imaging and voice information. There are four general body types used to study preventative measures to ward off ailments. Visitors can also get a glimpse of the technologies such as laser acupuncture and aromatic smoke-free moxibustion.

“It’s great that they can combine modern technology with traditional methods to treat people,” stated Kim Yong-soo, 62, of Seoul. “The machine that determined my constitutional type using facial imaging and voice was the most interesting. Seeing my facial features analyzed on the monitor and seeing the results were fascinating.”

One notable exhibit features over 500 medicinal herbs and their benefits to commemorate Donguibogam, a compilation on medical knowledge and treatment techniques compiled and edited by Heo Jun (1539-1615), a royal doctor of the Joseon Dynasty, with the help of medical experts and scholars.

The compilation was added to Unesco’s Memory of the World Register last July. 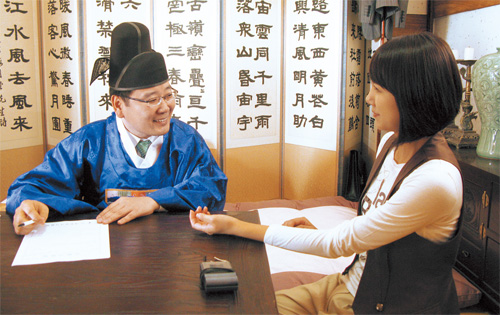 A visitor receives free treatment at the Traditional Oriental Medical Clinic. Provided by the organizers

In addition, visitors to the exhibition can get a glimpse of traditional medicine and remedies from 16 countries.

“I’ve visited various places during my stay here, and it was nice to learn and pick up new things,” he added.

Then there are places like Gabon and its traditional methods, which are handed down from generation to generation.

“Unlike in Korea, there are no schools where one can learn traditional medicine in Gabon,” said Amavi A. Amah, doctor of ONG Prometra Gabon, a nonprofit organization that promotes traditional medicine throughout Africa. “But we do have ancient methods that have proven to work.

“For example toete, an herb, is used to suppress tobacco cravings while adania is used to provide an energy boost for the fatigued. This expo and the collaboration of various countries are a positive step forward for traditional medicine.”

For more information on the expo, visit www.hanbang-expo.org