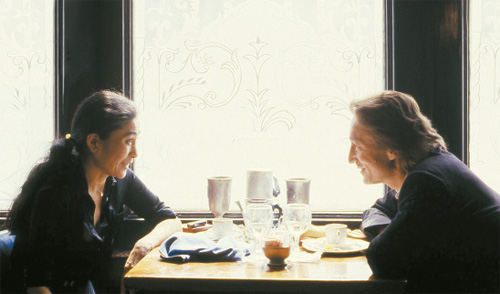 John Lennon and Yoko Ono have lunch before Lennon passed away. [JoongAng Ilbo]

LOS ANGELES - If John Lennon had lived to be 70, Yoko Ono thinks he would have been more relaxed about the milestone than he was about his 40th birthday.

Ono recalls the ex-Beatle fretting about reaching that number: “I can’t believe I’m going to be 40!’’ she said he told her.

Since then, Ono has worked to keep his legacy vibrant, and continues to do so with his 70th birthday today. Ono will spend what would have been Lennon’s birthday in Iceland, celebrating with a concert by her Plastic Ono Band and the lighting of the Imagine Peace Tower in his honor. In a recent interview, the 77-year-old artist and peace activist talked about her mission to keep Lennon’s memory alive.

Q. John Lennon was a musician and an activist. Are enough musicians, artists trying to have an impact on social change?

Ono: Of course, they’re all doing it. It’s great. When John and I started doing it, you know, we were looking around - “Are we the only people?’’ It was a bit like that. But now I think there’s so many musicians, they’re very strong, strong sort of activists. All of them. It’s great.

What do you think would have been John’s take on the turmoil in the world today?

He would have been totally angry. ... He would have felt like he wanted to run somewhere and just bang something or strangle someone, you know? But then I think, I’m sure he would have relaxed and decided he should still be an activist. We need to really do something about the world. Otherwise, we’re all going to blow up together.

What do you think of “Nowhere Boy’’?

This is [Sam Taylor-Wood’s] first film. Incredible, right? She’s like a miracle. And everybody performing in it, they’re very good. And I was surprised, because this is the first time that anybody - well, maybe they read the books or something - but anybody understands how John’s childhood was. ... I was very, very thankful that Sam Taylor-Wood made this film.

How did you decide what music you wanted to rerelease with the boxed sets?

The only thing that I probably had something to do with, to decide, is I didn’t put “Two Virgins,’’ I didn’t put “Life With the Lions,’’ because they’re too sort of avant-garde in a way. ... I wanted to introduce John as an incredible, special rocker first. And then he dabbled in some avant-garde things and that’s OK, but that’s a lot of me is in there, so I thought, “Well, you know, let’s not do that.’’

The song “Woman’’ - what does it mean for you to listen to that song years later?

Of course, it was very flattering that John wrote that. But at the same time I was the one who was around. I was very lucky. Many painters, you know, they paint their wives, which is kind of like a maybe cheap and simple way of doing it, I don’t know. ... So he used me in that sense and probably I inspired him or something. But I think he’s talking about all women and I think that’s very important.

Do you still put his music on and listen to it?

I listened to his music almost every day or every other day or something the past 30 years because there’s other requests and things, and for business reasons I listened to them. But it’s not a very relaxing thing to do. I don’t listen to his songs to just relax, because then, you know, it just makes me feel sort of, well - it’s painful in a way. AP