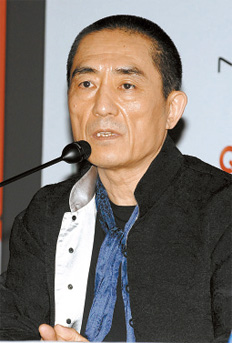 BUSAN - Zhang Yimou’s “Under the Hawthorn Tree” moved many viewers to tears when it premiered internationally in Busan on Thursday. It was released in China in mid-September.

In the film, Jing Qiu (Zhou Dongyu) is sent to work in the countryside, like millions of Chinese students of that era who were told to evoke their proletariat spirit under the Cultural Revolution. There she meets and falls in love with Lao Shan (Shawn Dou), who is from a high-class family. Their forbidden love disrupts Jing’s initial hopes of proving her loyalty to the Communist Party and becoming a teacher.

The young actors, all in plain shirts and pants, depict an age of innocence in rural China, where eggs were rare nutritious food and washing someone else’s feet was an expression of love, an element that viewers in Korea and other Asian countries would be able to relate to.

“Back in the days of revolution in China, we had such a period of poverty,” Zhang said. “Eggs were also rare, so they were difficult to have,” he said, referring to a scene in which a mother gives boiled eggs to her daughter after she gets an abortion.

Zhang rejected criticism that the plot may be too conventional for modern-day viewers, saying Ai Mi’s original novel was too powerful to be altered.

“The male character is dying of leukemia, and it is the subject that has been no doubt a lot used in past films,” Zhang said. “But that’s what is said in the novel, and making the film based on it, I didn’t want to change much.”

The film marked Zhang’s return to his early auteurism after many years of big-budget productions like “Lovers,” “House of Flying Daggers” and the opening and closing ceremonies of the 2008 Beijing Olympic Games.

“A lot of commercial films I’ve made in China, so I get a lot of questions about why I decided to make such a small-scale film,” he said. “But I also [have] been through the Cultural Revolution myself. And I also thought this novel is a great story.”