A nail-biter series, this time going to the 11th

A nail-biter series, this time going to the 11th 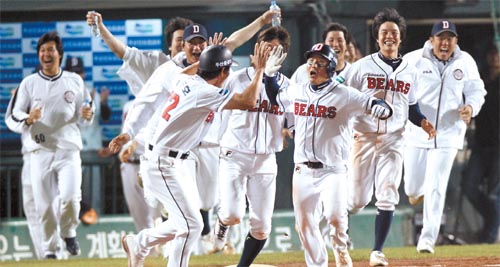 Sohn Si-hun, center, celebrates with his teammates after hitting the game-winning single at the bottom of the 11th inning to give Doosan a 9-8 win in game three of KBO second round playoff series in Jamsil, southern Seoul. [YONHAP]


In a tightly contested series, with the first two games determined by a run, game three also came to a thrilling finish. It took 11 innings but the Doosan Bears managed to eke out a 9-8 win on Sohn Si-hun’s game-winning single yesterday to take a 2-1 series lead.

Samsung Lions’ offense roared out of the gate with four runs in the first two innings but Doosan matched Samsung’s offense with clutch hitting. Samsung looked to have bagged the game by scoring two runs in the 11th inning but Doosan responded with three runs in the bottom of the 11th to win the crucial game three of the best-of-five series.

“We got lucky at the end but Samsung also provided their fans with a heck of a game,” stated Doosan manager Kim Kyung-moon in a post-game interview. “We had the chance to end the game in the eighth and ninth innings. It was nice to see our team come together in the extra innings. I thought it was over after giving up two runs in the 11th inning but I’m happy to have won the game.”

“The heart of our batting order failed to produce in the game,” staed Samsung manager Sun Dong-ryeol. “If we lose tomorrow, we’re done. I’m sure our players will try their best.”

The two sides started the game with their ace pitchers as Jang Won-sam took to the mound for the Lions and Kim Sun-woo for the Bears. However, the two sides had to go to their bullpen early as neither starters managed to survive past the third inning.

With Doosan leading the game 6-4, Samsung managed to score another run in the top of the eighth as pinch-hitter Cho Young-hoon hit a solo homer to close the gap to 6-5. Then Park Han-yi hit his third double of the game to drive in a run to tie the game. Park had come up big for the Lions in game one, hitting a three-run home run in the bottom of the eighth inning to lead his team to a 6-5 win.

The game went into extra innings tied at six runs apiece and was decided in the bottom of the 11th inning. Samsung scored two-runs in the top of the 11th to take an 8-6 lead but Doosan’s Lim Jae-cheol’s double with bases loaded and no outs tied the game. Then Sohn Si-hun hit a game-winning single to give Doosan a 9-8 win.

Samsung Lions entered the series well-rested after getting a bye in the first round while Doosan came off five games in the first round against Lotte Giants. The tight postseason schedule for the third seed Doosan has proven to be a non-factor so far but instead, the momentum from the first round has been beneficial for the Bears.

Samsung won the opening game of the series in a dramatic fashion, 6-5, off Park Han-yi’s three-run home run in the bottom of the eighth inning on Thursday night. Doosan got a strong outing from Kelvin Himinez and came close to winning the game two on Friday before Doosan closer Lim Tae-hoon held off the Lions in the bottom of the ninth with two men in scoring position to even the series with a 4-3 win.

Game four takes place at Jamsil Stadium in southern Seoul tonight at 6 p.m with Hong Sang-sam expected to start for Doosan and Tim Redding for Samsung.