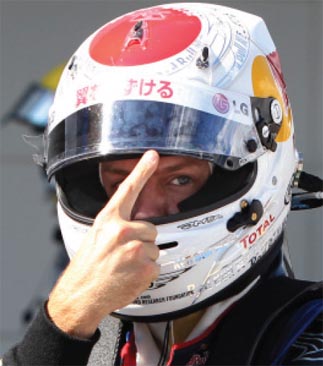 Red Bull Formula One driver Sebastian Vettel of Germany gestures after the qualifying session of the Japanese F1 Grand Prix at the Suzuka circuit on Oct. 10. [REUTERS/YONHAP]

The 23-year-old led the pole and recorded his third victory of the season, with championship leader Mark Webber finishing second, 0.9 seconds adrift. It ranks as the third time Red Bull Racing had drivers finish in the top two spots this season after races in Malaysia and Monaco.

Ferrari’s Fernando Alonso was third, 1.8 seconds behind Webber, while McLaren teammates Jenson Button and Lewis Hamilton were fourth and fifth, with Hamilton nursing an ailing car to the finish.

Vettel was quickest to react when the lights went out to start the race, leading a slow-starting Webber off the line. The Australian was passed into the first corner by Renault’s Robert Kubica, but a safety car period slowed the race as quickly as it started.

Kubica’s teammate, Russian Vitaly Petrov, smashed into the wall on the outside of the circuit trying to avoid the slow-starting Williams driver Nico Hulkenberg, while Ferrari’s Felipe Massa clashed with Force India’s Tonio Liuzzi at the first turn, with both drivers retiring on the spot. Kubica then retired under the safety car when the right rear wheel of his Renault worked loose on lap three, leaving Webber to chase Vettel when the race restarted four laps later.

Button, the only driver in the top 10 to start on the more durable harder tire, led the race for 13 laps in the middle stages before his pit stop for softer rubber dropped him to fifth. He gained a place when Hamilton was forced to slow with gear selection problems with nine laps remaining.

There was drama before the race when Brazilian Lucas di Grassi, who qualified 21st for Virgin Racing, had a accident at the 130R corner on his reconnaissance lap to the grid. The 26-year-old tore a wheel and the rear wing from his car in the bizarre smash, but was able to escape unhurt. Vettel’s win places him third in the championship standings on 206 points.

With three races remaining, Webber leads with 220 points, while Alonso is second at 206, edging the German on race wins for the season. Hamilton drops a place to fourth with 192 points, while Button remains fifth with 189.

Earlier in the day, Vettel sailed to his eighth pole position of the season for Red Bull Racing at the Japanese Grand Prix.

Vettel - who sits fourth in the championship standings, 21 points behind leader and teammate Mark Webber - edged the Australian by 0.068 seconds with a lap of 1 minute, 30.785 seconds. Qualifying was held yesterday after rain battered the Suzuka circuit on Saturday.