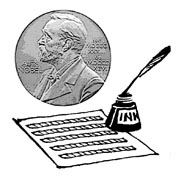 The laureates of the Nobel Prize for Literature are an array of literary giants such as Herman Hesse, André Gide, Ernest Hemingway, Albert Camus and Gabriel Màrquez. They all deserve to be named as the inheritors of a great cultural tradition.

But there is another list of writers, comprised of James Joyce, Henrik Ibsen, Marcel Proust, Jorge Luis Borges and Leo Tolstoy. They belong to the “dropout group,” but they are comparable to those on the other list.

Although Tolstoy was said to be the strongest candidate for the first Nobel Prize for Literature in 1901, the prize instead went to Sully Prudhomme, a French poet. The following year it went to German historian Theodor Mommsen. It was because of the old political conflict between Russia, his fatherland, and Sweden, the Nobel Prize host country. Anton Chekhov and Maksim Gorki also faced the same fate.

After the establishment of the Soviet Union, the political inclination of the candidates became a big factor. Ivan Bunin, who became the first Russian laureate of the literature prize in 1931, was a poet who was in exile in France during the Russian Revolution. The 1958 literature prize was given to Boris Leonidovich Pasternak, the author of “Doctor Zhivago,” which criticized the reality of living under socialism. Mikhail Sholokhov, author of “And Quiet Flows the Don,” was the first nondissident Russian writer who was awarded the literary prize, in 1965.

The fate of South America’s leading writers changed depending on their position toward political reality. From Paablo Nevada, the winner of the prize in 1971, to Mario Vargas Llosa, who was named the winner this year, writers who stood against dictatorship won the favor of the judges. On the other hand, Jorge Luis Borges, who was considered to be the master of magical realism, was never awarded the prize because he had once defended Chile’s dictator Augusto Pinochet.

Under such circumstances, Korean poet Ko Un was also considered to be a strong candidate for the 2010 literature prize, but his hope was dashed. With the news, self-criticism about whether Korea deserves to produce a literature prize laureate arose. Has Korean society nurtured a reading culture mature enough to produce world-class literary men?

The difference in reading culture between Korea and Japan, which has already produced two Nobel laureates, is noticeable at bookstores. “1Q84,” written by Murakami Haruki, who was also mentioned as a candidate for the Nobel Prize this year, sold 4 million copies in Japan and more than 1 million copies in Korea. Korea’s book market ranks 10th in the world in size, but the portion of literary works is only 2.8 percent. I wonder whether Korea should, for the time being, concede the chance of winning the prize to other countries that respect literary men as much as their popular entertainers.