Kim heir shown to outside world on anniversary

Kim heir shown to outside world on anniversary 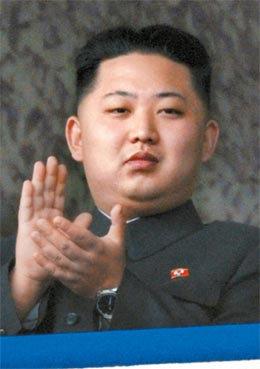 Tanks, floats, missiles and 20,000 goose-stepping soldiers of both genders were on display in Pyongyang yesterday to celebrate the 65th anniversary of the founding of the North Korea’s ruling Workers’ Party. The North’s leader Kim Jong-il, his heir apparent Kim Jong-un and an unusually large number of foreign correspondents allowed in for the occasion watched the spectacle.

The nearly two-hour parade started at 9:30 a.m. and was broadcast live on state channel Korean Central Television. It is rare for Pyongyang to show the outside world live footage of North Korean events, especially involving its leaders. KCTV had beamed three live broadcasts prior to yesterday’s parade, the first being a performance in Pyongyang in 2008 by the New York Philharmonic Orchestra and the others being soccer games.

North Korea’s leader and his son, Jong-un, were seen standing on a raised platform clapping and saluting the parade, considered the largest North Korean military parade ever.

With them on the elevated dais at Kim Il Sung Square in Pyongyang were high-ranking North Korean military officers Ri Yong-ho, Kim Yongchun and Ri Ul-sol. Ri Yong-ho, considered to be the current powerhouse of the North’s military as chief of the General Staff of the Korean People’s Army, was seated between Kim Jongil and his son. 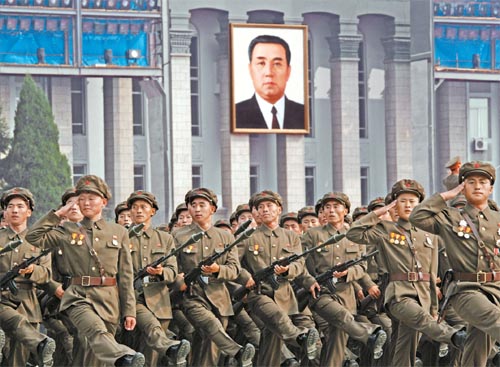 Kim Jong-un, top, attends a massive military parade, above, marking the 65th anniversary of the nation’s ruling Workers’ Party in Pyongyang yesterday. This year’s celebration comes less than two weeks after Kim Jong-il’s re-election to the party’s top post and the moves to make his 20-something son heir apparent. [AP]


Kim Jong-il, 68, who had an undiagnosed dark mark on the right side of his face, struggled to rise from his seat to watch the parade. His left hand was stiff as he clapped and he limped, often holding onto the railing for support, the possible aftereffects of a stroke in 2008. Jong-un, who is in his late 20s, wore a dark suit and occasionally turned from the parade to speak to other officials on the dais.

Yesterday’s celebrations were full of rarities, especially North Korea’s invitation to an estimated 80 foreign correspondents to cover the event. Pyongyang provided Internet access and a press center for the occasion.

Inviting foreign press, including reporters from the U.S. — which the North considers its enemy — and showing live coverage is seen by analysts as part of the Kim regime’s determination to show that Kim Jong-un will succeed his father after he dies.

“This parade is extremely important as it is the first major event held after Kim Jong-un was anointed as heir,” said Yoo Ho-yeol, a Korea University North Korea expert.

A delegation from China, including Zhou Yongkang, a senior Communist Party leader, also visited to attend the celebration, according to North Korea’s state news agency KCNA, and Chinese President Hu Jintao sent a letter of congratulations through Zhou to Kim Jong-il for the anniversary. Kim was said to have joined the delegation for talks shortly after receiving the letter on Saturday.

Prior to the celebration, many had expected it to be Kim Jong-un’s first public appearance. But the father and son made a showing at an Arirang gymnastics performance the previous day, according to KCNA,

Experts agree that Jong-un’s frequent appearances with his father, especially at major events like yesterday’s, are all to help designate him heir apparent.

The visit to the memorial emphasized Jong-un’s blood connection with the country’s founder, his grandfather. Kim Jong-un has now made four official appearances reported by the state’s media since a Workers’ Party convention last month, when he was given relatively high positions within the party and, a day before, made a fourstar general.

His status as heir apparent was officially announced for the first time last Friday, when Yang Hyong-sop, vicepresident of the Presidium of the Supreme People’s Assembly, confirmed that he would succeed his father.

“He will lead North Korea from now on,” said Yang in an interview with the U.K.’s Associated Press Television News last Friday. “The North Korean people take pride in the great leadership that [has continued] for three generations from Kim Il Sung to Kim Jong-il to Kim Jong-un. It is an honor to serve young general Kim Jong-un.”

Previously, North Korea had offered no explanation for Kim Jong-un’s rise, or his sudden appearances in the state media.

Said Yang: “Comrade Kim Jong-il and now the young general Kim Jongun, who will follow him, is leading the revolution and the people regard this as an honor.”