The man who made up, gave up, juche

The man who made up, gave up, juche 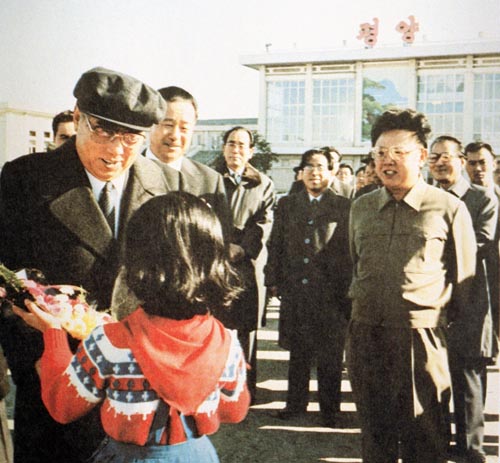 Hwang Jang-yop, second to the right of Kim Il Sung, watches the former North Korean leader before Kim’s flight to the Soviet Union in 1987. Current leader Kim Jong-il is on the right in the foreground. [YONHAP]


Hwang Jang-yop, chief ideologue of North Korea and former teacher of Kim Jong-il, died in Seoul yesterday, 13 years after becoming the highest-ranking North Korean to defect to the South. He was 87.

Hwang - architect of the communist regime’s juche, or self-reliance, ideology - startled the world with his 1997 defection in Beijing. Before defecting, he served in various key posts, including chairman of the Presidium of the Supreme People’s Assembly, Pyongyang’s rubber-stamp legislature. He was Kim Jong-il’s teacher at Kim Il Sung University.

Born on Feb. 17, 1923, in Kangdong, South Pyongan, Hwang joined the Workers’ Party in 1946. From October 1949 to November 1953, he studied philosophy at Moscow University and began his academic career as head lecturer of philosophy at Kim Il Sung University. With his promotion as the president of the prestigious university in 1965, he rose quickly in the country’s power elite. In 1972, Hwang became chairman of the Supreme People’s Assembly and served in the post for 11 years.

He systemized the juche ideology in the 1970s and redefined it to support Kim Il Sung’s regime. He also built the Juche Research Institute to further develop the ideology and promote it overseas.

Hwang cheers at Seoul Airport the day he defected to South Korea in 1997. [YONHAP]

Hwang rose to power because of his ties to Kim Il Sung, but his status weakened after Kim’s death. Under Kim Jong-il, power shifted quickly to the military, and Hwang eventually planned his defection using his rare privilege to travel abroad.

On his way back from a trip to Japan to give a special lecture on juche, Hwang entered the consular section of the South Korean Embassy in Beijing on Feb. 12, 1997, and asked for political asylum. At the time, he was the Worker’s Party secretary in charge of international affairs, and he defected with his aide, Kim Dok-hong, a businessman. They arrived in Seoul after staying inside the Beijing mission for 34 days and in the Philippines for 33 days.

”I have come to the Republic of Korea in order to warn about the danger of an armed invasion of the South by the North and to contribute to the peaceful unification of our country,” Hwang said in his first press conference on July 10, 1997.

His wife and three children were reportedly purged in the North.

Hwang quickly became a harsh critic of the reclusive communist regime and the Kim family. Kim Jong-il reportedly called him a traitor and North Korea vowed to retaliate against him. Last April, South Korea arrested two North Korean agents who were dispatched to assassinate Hwang.

The agents reportedly trained for six years for their mission and posed as defectors to enter the South and get to Hwang, authorities said at the time. The North’s orders were “not to allow Hwang to die naturally,” the alleged assassins told authorities.

At the time of his defection, the Kim Young-sam administration promised support for Hwang’s political activities in the South to “democratize” North Korea.

The promise, however, lapsed during the liberal Kim Dae-jung and Roh Moo-hyun administrations, which promoted a “Sunshine Policy” to engage the North.

Tensions between Hwang and the Kim administration reached a peak in 2000 because the government feared that Hwang’s continued criticism of the North Korean leadership would hinder reconciliation between the two Koreas. The National Intelligence Service once kicked him out of a safe house in July 2003.

Under the conservative Lee Myung-bak administration, Hwang gained more freedom to criticize the North. Earlier this year, Hwang traveled to Washington for his second visit since 2003, when he appeared at a congressional hearing to denounce North Korea’s nuclear ambitions and poor human-rights record. After his first visit, Pyongyang called him “human scum.”

In March, Hwang said North Korea will not collapse despite international sanctions unless China ends its support. He also called for the United States to persuade China to do so at a forum at the Center for Strategic and International Studies.

Yesterday, former President Kim Young-sam expressed condolences over Hwang’s death. “He was a great patriot who had tried to stop a war and fiercely criticized the North’s dynastic dictatorship,” Kim was quoted as saying by his chief secretary.

“He courageously endured the North’s persistent assassination attempts. He often discussed democratization of the North and reunification of the two Koreas even after I left the Blue House, and I send my sincere condolences and sorrow.”