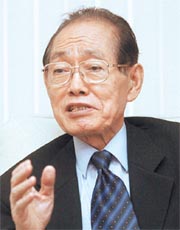 Hwang Jang-yop, the highest ranking North Korean official to defect to the South, was found dead yesterday morning in a safe house in Gangnam, Seoul.

According to police, the body of the 87-year-old former North Korean was discovered at 9:30 a.m. in a bathtub in a government safe house in Nonhyeon-dong, Gangnam district, where Hwang had lived for an undisclosed period of time.

“There is no suspicion that Hwang’s death was a homicide,” said Gangnam Police Precinct head Ahn Byeongjeong at a media briefing yesterday. “Hwang normally sat in the living room in the mornings, but he was not seen there today, so an agent from his protection team knocked on the door twice, but heard no reply. The agent opened the door with an emergency key and checked the bathroom inside the bedroom and discovered Hwang’s body inside the tub.”

After his defection in 1997, Hwang faced numerous assassination threats from Pyongyang. After visiting Washington in March, the threats escalated and his security detail was boosted to a level higher than even a prime minister, police officials said.

The police refused to provide details about the two-story safe house, including how long Hwang resided there. The ground floor was used by the protection team, and Hwang lived on the second floor.

Forensic experts from the Seoul Metropolitan Police Agency, the Gangnam Police, the National Institute of Scientific Investigation and Seoul National University, as well as a prosecutor from the Seoul Central District Prosecutors Office conducted a visual postmortem examination, but found no wounds. The National Institute of Scientific Investigation was to conduct an autopsy later yesterday to find out the cause of Hwang’s death. The security staff involved in Hwang’s protection are to be questioned and CCTV records will be checked to see if there was any intrusion by an outsider.

While Hwang’s body was discovered at 9:30 a.m., the exact time of death will only be available after an autopsy, Ahn said. He said Hwang routinely takes baths and the temperature of water in the tub was warm when the body was discovered.

“At the time of discovery, he was not breathing,” Ahn said. The police said a suicide was unlikely, but they have no way of ruling out the possibility completely.

“Hwang defected to the South to unveil the reality of the North,” Bae Eun-hee, spokeswoman of the ruling Grand National Party said. “Despite numerous threats, he was devoted to reveal the North’s reality and improve North Korean people’s human rights. The Grand National Party highly respects his courageous contribution to Korea’s peace. We will do our best to protect the nation’s security and work toward a peaceful reunification of the two Koreas.”

Democratic Party floor leader Park Jie-won also gave condolences: “Hwang was a scholar who created the Juche ideology in the North and harbored a strong passion for the Korean people. I hope he rests in peace because he died in South Korea.”

The Blue House did not issue a statement as of yesterday afternoon.

A funeral altar is to be placed at the National Police Hospital in Garakdong, Seoul.