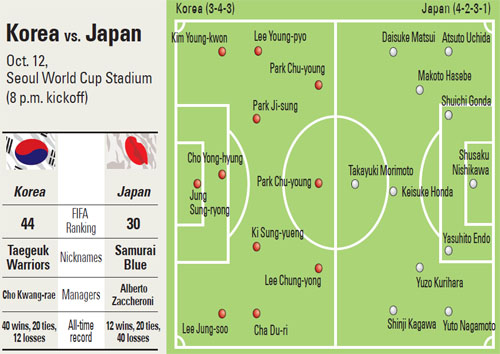 Park Ji-sung and Keisuke Honda hold the keys to their respective team’s success in tonight’s friendly match between Korea and Japan at the Seoul World Cup Stadium.

The friendly match is the last tune-up match of the year for manager Cho Kwang-rae and his Taegeuk Warriors before they play in the 2011 Asian Cup in Qatar in January. Cho has focused on testing new players that fit his system while managing Korea to a 1-1 record against Nigeria and Iran.

However, Cho and his men will be more focused on winning against their rivals Japan.

The Samurai Blue have been playing well since the end of the 2010 South Africa World Cup in June and has won all three of its friendly matches since the World Cup. It defeated Paraguay, 1-0, and Guatemala, 2-1, last month before its new manager Alberto Zaccheroni won his debut match against Argentina, 1-0, on Oct. 8.

As Cho mentioned in recent interviews, the match will be determined in the midfield with the team that dictates the tempo of the game from the midfield likely to come out on top.

As such, Cho has decided to use his captain Park Ji-sung at center midfield. Park will team with Ki Sung-yueng at center while veterans Lee Young-pyo and Cha Du-ri will likely start at the wing positions.

In recent games, Cho used Park as a forward to provide a spark on Korea’s sluggish attack, but the move was met with mixed results. Although Park has struggled to play up to his capabilities since the World Cup, he sounded confident about Korea’s chances against Japan.

“Japan has improved in all areas,” Park said. “However, just because they’re playing well, we don’t have to put pressure on ourselves or get intimidated.”

Japan’s defense, led by Yuto Nagatomo, will be confident and fully ready for the match. The left fullback had boldly stated he would contain the speedy Park prior to the 2-0 loss to Korea in Saitama on May 24 before allowing Park to score the opening goal merely six minutes into the game.

Nagatomo is confident after containing Argentina’s Lionel Messi on Oct. 8.

“We need to focus on defending the sidelines and increase our time of possession,” said Nagatomo. “I’m looking forward to seeing how well we play against Korea.”

Korea’s defense, which showed it had yet to adapt to Cho’s system against Iran, will have to work to contain the likes of Honda and Shinji Kagawa.

“Japan has cut down on passing in the midfield and its transitional game with quick passing,” said Cho in a recent interview. “The wing forwards move to the center area during attacks and Honda shifts to the wing. In such cases, a three-back defense can be effective. But we will prepare both three- and four-back systems for the game.”

The key to Korea’s defense will be Cho Yong-hyung. The versatile defender has been given the important task of containing Honda. When a 3-4-3 formation is in use, Cho will play the role of center defender and when Korea shifts to a 4-1-4-1 formation, Cho will shift to the role of defensive midfielder.

Honda is the heart of Japan’s offense. Although he is tabbed as the trailing forward behind Takayuki Morimoto, Zaccheroni has given him the freedom to roam the field to his liking depending on the situation. Containing Honda will be the first and most important step to neutralize Japan’s attack.

“This is my showdown with Honda,” Cho said. “I’ve studied a lot of film of Honda. Although he has a dangerous left-footed shot, he’s not the type of opponent we should fear.”

Korea and Japan played their first match in March of 1954 in a qualifier match for the 1954 Switzerland World Cup.

Korea pulled off a 5-1 win and has gone onto take a firm lead in the rivalry with a record of 40 wins, 20 ties and 12 losses. Korea is riding a four game winning streak against Japan and has not lost a game since Aug. 7, 2005 in Daegu when it lost 1-0.