A city’s tale through the eyes of a defector

A city’s tale through the eyes of a defector 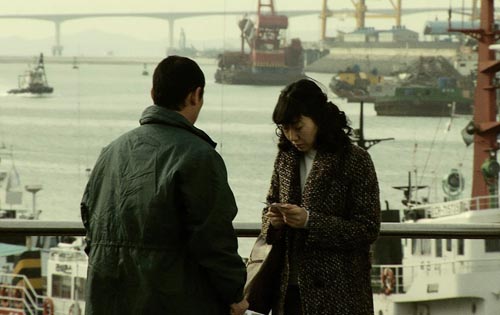 
Anything North Korean is an easy lure for a media that’s hungry for sensational stories, but Jeon Kyu-hwan, the director of “Dance Town,” a story of a female North Korean defector, has little desire to promote his film that way.

Jeon tries to diffuse any association to the political arena. After two feature films taking on the gloomy lives of an ex-convict, a migrant worker and day laborers, he puts the defector on par with a horde of marginalized individuals down and out in the metropolitan city of Seoul.

“After all, my story is not the story of a character, but the story of the city seen through the character,” said Jeon, who brought the final film of his Town trilogy to the Pusan International Film Festival currently underway.

Dance Town, which follows “Mozart Town” (2008) and “Animal Town” (2009), the winner of the Vesoul International Film Festival Netpac Award, starts with the restless delocation of Jeong-nim from her hometown Pyongyang and gradually shifts to the forlorn lives of her neighbor Seoulites, lives that are no easier than hers. As Jeong-nim drifts into loneliness in her government-provided apartment, a sick old woman dies alone in her house, a school girl gets a secret abortion and a divorced disabled man tries to end his life.

Its camera work is cold and detached, constantly diverting the audience’s attention from the emotions of the main character.

While observers might expect to hear the emphatic story of a North Korean defector, they are instead given a much broader picture of the cold reality of the cityscape.

“When I heard about the story of a North Korean defector, I thought I wanted to tell a story through her, not of her,” he said.

For Jeon, a heroic, tear-jerking story is already superfluous in mainstream filmmaking, and he has no desire to follow the flow.

Despite the critical acclaim and awards he has garnered from international film festivals abroad, none of his Town trilogy films has made it on the big screen at home. The difficulty with investment and distribution has been no different with even more internationally famous Korean directors like Park Chan-wook, Lee Chang-dong, Kim Ki-duk and Hong Sang-soo.

Dance Town is simple and unadorned, without gimmicks and style.

The bliss breaks when the illegal videos are discovered, and Jeong-nim is forced to defect to the South alone.

Scenes of public executions and the personality cult of Kim Il Sung and Kim Jong-il are left in place, but Jeon refuses to live a stereotypical life in North Korea.

“Be it Rwanda or Iraq, I think there certainly would be people who are happy, like there are in New York and Seoul. That’s their own life,” he said.

“I think it’s quite a dangerous idea to think, ‘How pitiable, how poor they are.’ Rich men’s children and top stars end their own lives here. Happiness is not simply the absence of worrying about food; they might have other kinds of happiness we don’t know.”