The woman behind the stars

The woman behind the stars

Keli Lee was dutifully following the Korean-American dream when her life took an unexpected detour.

She was in college at New York University and on her way to law school when she got a part-time job at a comedy club.

That led to a job at Warner Brothers and she soon found success, but not as a lawyer.

Today she is executive vice president of casting for ABC Entertainment. She does the casting for “Desperate Housewives,” “Grey’s Anatomy” and “Lost,” among other popular shows on the network.

Lee has become famous here for casting Yunjin Kim as Sun-Hwa Kwon on Lost. Kim was a popular actress in Korea before the Lost role made her famous around the world as well.

But Kim is not the only Korean actor Lee has brought to stardom. She also cast Sandra Oh on “Grey’s Anatomy” and John Cho on “FlashForward.” bringing them international recognition.

Lee was in town last week for a seminar at the Korea Creative Content Agency in Mok-dong, southwestern Seoul, where she talked with Korean producers and actors about her experience in the American entertainment industry. She also answered questions about how they could make the transition from Asia to Hollywood.

Lee was part of a seven-member panel that included Roy Lee of Vertigo Entertainment, who is well known for remaking hit Asian films - such as “My Sassy Girl,” “Il Mare” (from Korea) and “The Grudge” (from Japan) - for American audiences.

After the seminar, she sat down with the JoongAng Daily to talk more about her life and what it takes to make it in Hollywood. 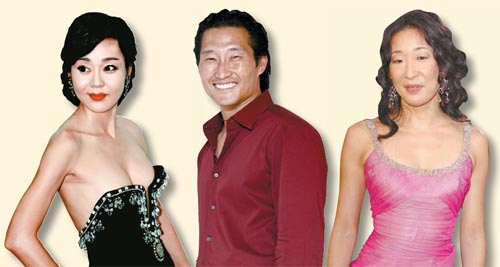 
Q. You’ve become a role model for many Koreans. How do you feel about being in the spotlight here?

A. I love doing interviews with the Korean media, mainly because I know that my mom and my grandmother would be happy to see me in the newspaper or on TV. Since my grandmother doesn’t understand English, having my story published in the Korean media is one way to tell her that I’m doing well in my field. I feel satisfied when they are proud of what I do for a living.

What is your job description, and what’s your daily schedule like?

I am responsible for casting the right people for the right roles in our shows. I have now been doing this job for 17 years. It requires that I watch a lot of television, a lot of movies, and have countless meetings with actors.

How did you gain the skills to do your job?

When I was 6 or 7, I often watched TV with my sister. She and I always argued about whether the person we were seeing on TV had just appeared on another show a few days earlier or not. Ten out of 10 times, I was right. I recognized actors and actresses’ faces no matter what roles they played. I guess I’ve always had the ability to remember faces.

What advice would you give to Korean actors who dream about working in Hollywood?

Build a career here in Korea and then go to America. There are so many actors in the U.S., and there are not enough opportunities for everyone. Create a market for yourself here, and then we will notice you there. That’s much more worthwhile than arriving in L.A. with nothing prepared. If you have the talent, we are going to want to work with you ... Also, try to have your own Web site with video, because when we are looking for you, it’s so much easier to actually type your name and get your Web site and video at once.

What does it take for a foreign-born actor to succeed in Hollywood?

One of the first questions we ask is “Can these actors speak English?” I think it’s important to learn a language, but it’s not just about learning the language in the place where you are living. Unless you are surrounded by people who speak English, you are never going to have a full grasp of the language. So spending time somewhere in the States would be very beneficial. It is also important to have an standard American English accent so that writers do not need to explain why a character has an accent.

Why is English such an important part of the equation?

Most people watch TV or movies to relax, but for you it’s your job. What do you do on your days off?

I try to spend as much time with my friends and family as possible. If you don’t get enough rest, there is no point in working hard during the week. I even got myself a karaoke machine, so I can have fun with friends and family whenever they visit.

Do you have any recommendations among the many shows with which you are involved this season?

I would say “Modern Family.” It started as a pilot and then got picked up for a regular season in 2009. Season 2 has just started. It’s a really funny comedy show, and I think everyone could fall in love with it.

Do you ever regret not listening to your parents and not pursuing a career in law?

I’ve never regretted becoming involved in this business. But I agree with my parents on one thing. They always wanted me to try not to forget the Korean language. Once, when they realized that my sister and I were losing our Korean, my father wouldn’t let us speak any English in the house. Instead of trying to speak in Korean, we stopped talking at all at home. I barely speak and understand Korean now. If I get a chance, I want to learn the language.