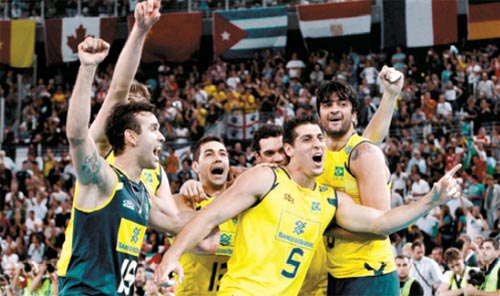 Brazil players celebrate after winning their final match against Cuba, at the Men’s Volleyball World Championships in Rome on Sunday. Brazil won 3-1. [AP/YONHAP]


ROME - Brazil’s experience carried it to a third consecutive volleyball world title Sunday with a 3-0 shutout of Cuba, the youngest team in the tournament.

The 25-22, 25-14, 25-22 victory solidified Brazil’s status as the top-ranked team in the sport, following its victories in 2002 and 2006. The South Americans also won the Olympic tournament in 2004, then took silver behind the United States in Beijing two years ago.

Brazil became the second team to win three straight world titles after Italy won in 1990, 1994 and 1998. The Soviet Union won a record six titles but never more than two in a row.

Earlier, Serbia beat host Italy 3-1 for third place, while Russia beat the United States in the fifth-place game Saturday. Brazil standout Leandro Vissotto Neves closed out the final with a spike on the South Americans’ fourth match point, then dropped to the floor - all 6 feet 11 inches of him - and was mobbed by celebrating teammates.

Brazil’s youngest player, 24-year-old Bruno Mossa Rezende, climbed the umpire’s ladder and gestured to the crowd to share in his celebration.

Wilfredo Leon Venero, at 17 the youngest player in the tournament, showed his nerves with a series of early errors, including missed serves, and failed to carry Cuba like he had in earlier games - despite scoring a team-high 15 points.