Hwang may be buried at National Cemetery

Hwang may be buried at National Cemetery 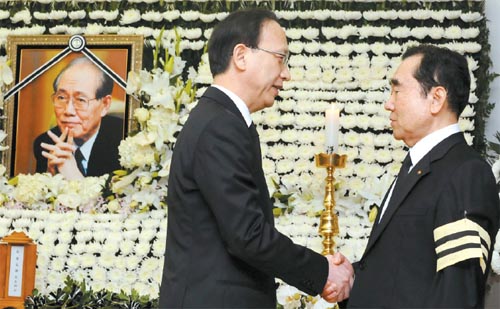 
As South Korean conservatives and defectors mourned the death of Hwang Jang-yop, a five-day-long funeral was planned for North Korea’s former chief ideologue, with the possibility of laying him to rest at Seoul’s National Cemetery.

Human rights groups and defector associations formed a funeral preparation committee yesterday, and it began negotiating with the government to bury Hwang, the highest-ranking North Korean official to ever defect to the South, at the National Cemetery in Dongjak-dong, Seoul.

Hwang’s body, following an autopsy at the National Institute of Scientific Investigation, was moved to Seoul Asan Medical Center in Pungnap-dong, Seoul, where his funeral will take place.

The 87-year-old was found dead in a bathtub in a safe house in southern Seoul on Sunday morning, and the authorities conducted an autopsy to find out the precise cause of death. Hwang had been under the threat of assassination by North Korea, but an initial examination showed no wounds on his body.

Kim Suk-hyang, a 68-year-old adopted daughter of Hwang, was the chief mourner representing the family. After meeting with Hwang in 1995 in China, she reportedly helped him seek political asylum in South Korea. She is a former professor and a businesswoman and was adopted by Hwang after he arrived in South Korea in 1997.

“Until his last moment, Hwang had a strong ideal to change the North Korean regime,” Lee said, after paying respect at the mourning altar at Seoul Asan Medical Center. “He deserves national mourning.”

Negotiations were ongoing with the government to bury Hwang at the National Cemetery, which requires a government honor. “Hwang had come to the South, leaving behind his family in the North,” said an official from the funeral committee. “He left behind 26 publications. We believe the government will confer posthumous honors.”

Unification Minister Hyun In-taek visited the mourning altar yesterday afternoon and told journalists that the government was reviewing the possibility of conferring a posthumous order on Hwang.

“His last footprints were historic steps to improve North Korea’s human rights situation and achieve a peaceful reunification,” Hyun was quoted as saying by a ministry official. “We will make a decision [on conferring the order] as soon as possible.”

Another official said the final decision will be made by the cabinet. President Lee Myung-bak also sent flowers to the altar yesterday.

The Grand National Party’s leadership, as well as Minister without Portfolio Lee Jae-oh, also paid a visit to the mourning altar, along with other high-profile conservative visitors.

Representatives from the Korea Veterans’ Association visited, along with hundreds of ordinary citizens.

A ceremony to lay Hwang’s body in his casket will take place this morning.

Kim, Hwang’s adopted daughter, said the former secretary of the North Korean Workers’ Party had been extremely frustrated and disappointed about a series of recent events in both Koreas. He was angry about North Korea’s third-generation power succession and South Korean leftists’ skepticism over Seoul’s conclusion that Pyongyang was behind the March sinking of the Cheonan warship, she said.

The former Workers’ Party secretary and North Korean leader Kim Jong-il’s university teacher had been treated at the National Police Hospital’s dental, internal medicine and orthopedics departments several times since May as an outpatient, the hospital said, but had no serious condition.

While Hwang’s wife and three children in North Korea were reportedly purged after his defection, his only legal family member is his adopted daughter Kim.

Newsis, however, reported yesterday that he was survived by a 49-year-old South Korean spouse and an 11-year-old son. Because of death threats, the son is living in the U.S., while the wife moves back and forth between the two countries, the report said.